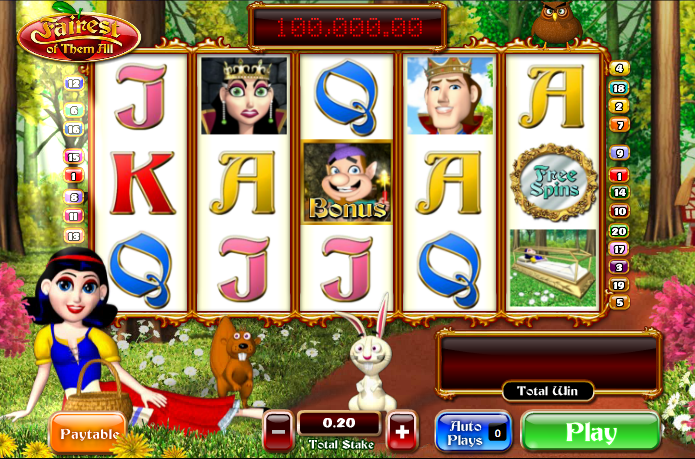 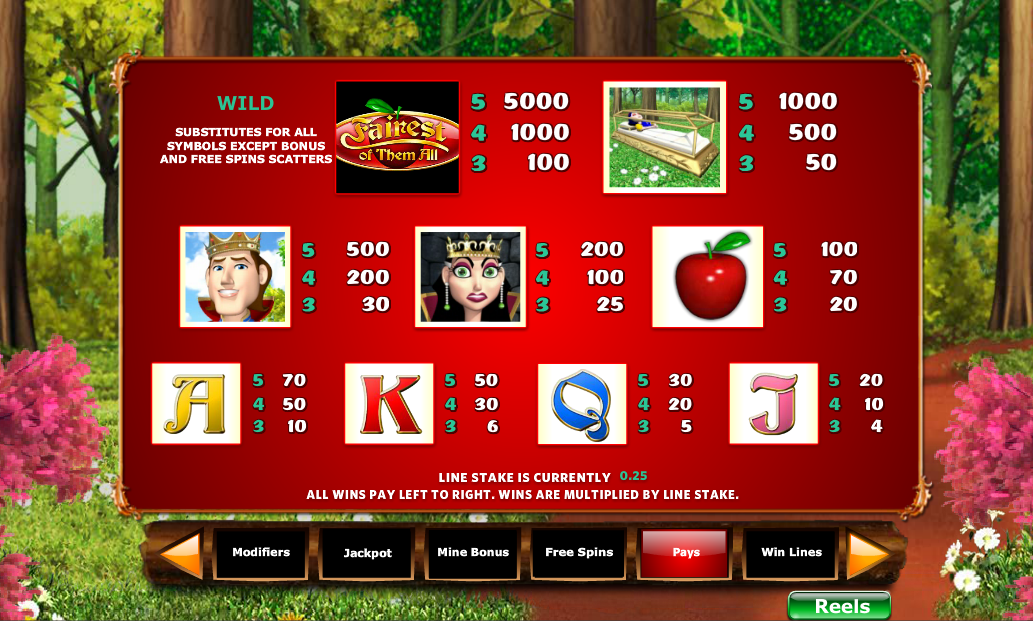 The title of this online slot from Ash Gaming makes it pretty clear that this is a game based on a fairytale and in our opinion they usually turn out to be pretty entertaining. This one is of course based on the story of Snow White and the Seven Dwarfs and it comes complete with several bonus features and a progressive jackpot.

Fairest Of Them All takes place over five reels and twenty paylines and the backdrop to those reels is a pretty forest complete with cute animated animals and Snow White herself.

The symbols are a combination of the standard playing card icons plus some theme-related pictures such as the evil Queen, the heroic Prince, the notorious apple and the glass coffin.

The game’s logo is the wild symbol and there are two bonus symbols – the dwarf and the free spins icons which activate the main features.

At any time during the base game, Snow White can reward you with random bonuses:

Trigger this game by landing three of the dwarf symbols on reels one, three and five; as you can see from the video below you will head down into the mine where you choose a dwarf to start with.

Now select a place to dig on the wall and earn a prize for each one – the cash value of the dwarf is added to each prize. You may be offered the chance to pick another dwarf and he will add to each prize also. The game is over when you hit a ‘Collect’ spot.

Land the free spins symbol on reels two, three and five to trigger this feature. You will begin with five free spins but each time Snow White appears in the mirror the spins countdown will lock and stop decreasing. If she appears again the multiplier will increase by 1x but if the evil Queen appears she will unlock the counter and reset the multiplier to zero. A maximum of 100 free spins are available here.

There are three ways to win the progressive jackpot, the total of which is displayed above the reels:

This is a lovely game with some really high quality graphics and sound effects. Ash Gaming do a good line in creative bonus features and this is no exception. There’s even a progressive jackpot if you’re that way inclined.