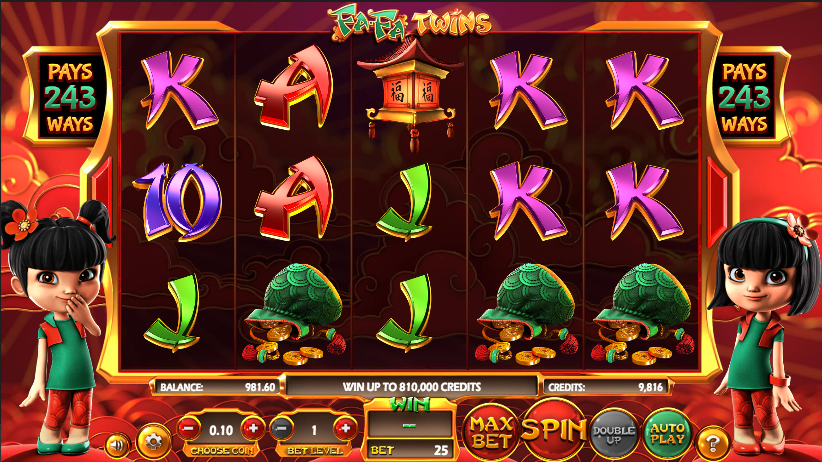 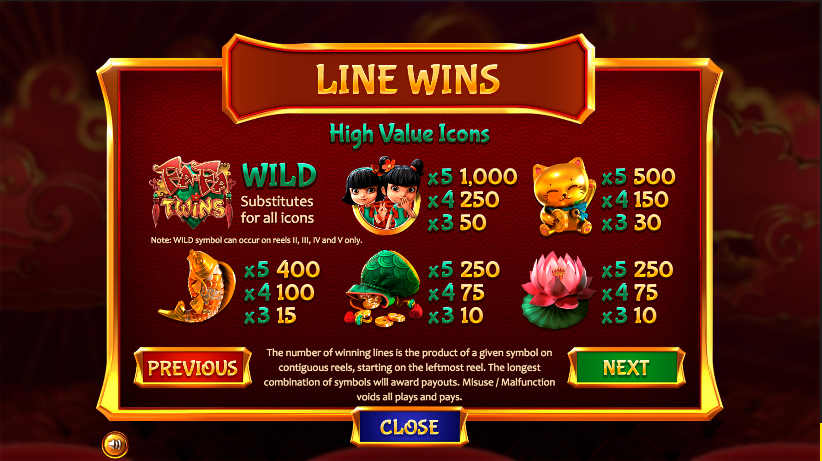 Online slots we would describe as ‘cute’ usually feature baby animals of some description but in the case of Fa-Fa Twins the main characters are two adorable little twin girls who lend their identities to the gameplay of this machine. It’s developed by Betsoft Gaming and it includes a reel-syncing feature which has the potential for some big wins.

Fa-Fa Twins is a five reel slot with three rows and 243 ways to win; there’s no traditional payline structure and winning combinations can be formed as long as there are matching symbols in adjacent rows starting from the left hand side. There’s an oriental theme to this slot and the gold-rimmed reels spin against a backdrop of a rising red sun while the Fa-Fa Twins stand on either side with differing haircuts the only way to tell them apart.

There are six theme-related symbols including the twins, a lucky gold cat, a Koi carp, a bag of coins, a pink flower and a lantern; lower values are the standard 10, J, Q, K and A.

The wild symbol is the Fa-Fa Twins logo, it appears on all reels except reel one and it will substitute for all others to form winning combos.

The extra feature here is in the gameplay and it’s all to do with Dual Reels; at the start of each spin at least two adjacent reels will be identical but this can extend to include a 3rd, 4th or even a 5th reel – which would obviously be a massive win.

Each win can be gambled by clicking the ‘Double Up’ button below the reels and you can now try and double your winnings as many times as you like by guessing heads or tails; beware though that a wrong guess will lose it all.

Fa-Fa Twins certainly lives up to previous Betsoft slots in the quality stakes, the lack of a separate bonus feature may put some players off; still it’s a very engaging game with some cute characters so why not check it out.