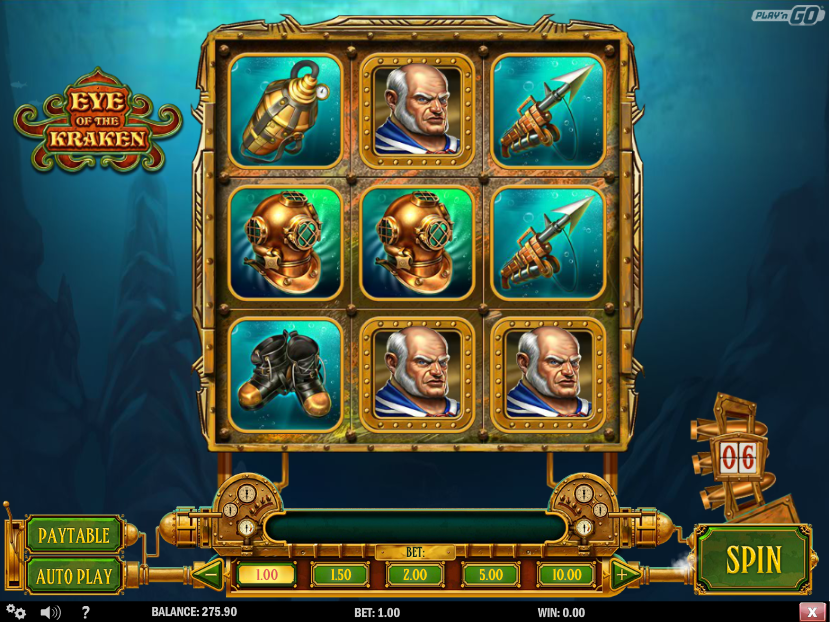 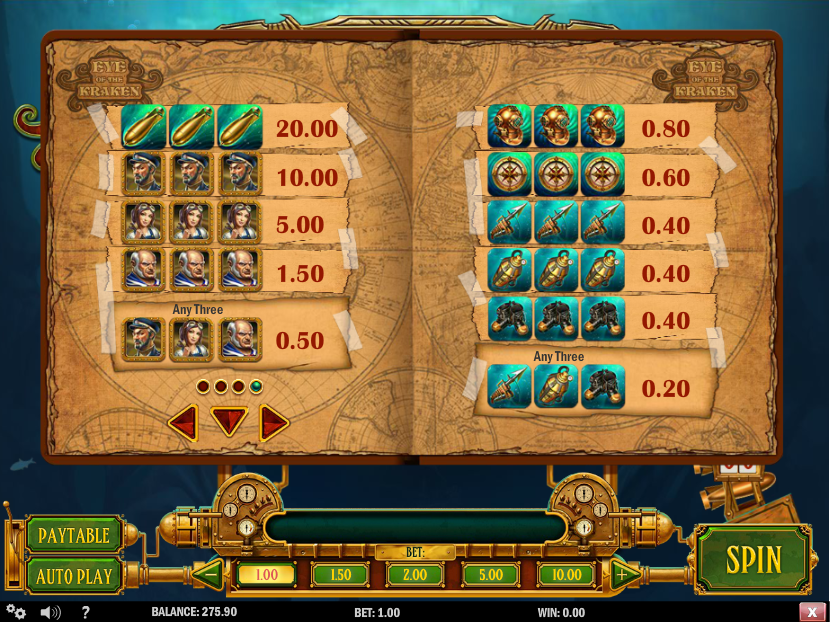 The Kraken is a mythological creature first described in Icelandic sagas some eight hundred years ago and it’s form has changed over the years; we now regard it as a giant squid, big enough to engulf ships and drag them to the bottom of the ocean. Eye Of The Kraken is an online slot from Play N Go themed on this fantastic creature and all the essential details are in the review below.

Eye Of The Kraken is a three reel slot with eight paylines – horizontal, vertical and diagonal. The action takes place underwater and there’s a Victorian vibe here reminiscent of Jules Verne stories.

The four higher value symbols are the three characters, the captain, the girl and the sailor plus the torpedo; the lower values are a diving helmet, a compass, a harpoon, an oxygen tank and some diving boots. Three mixed symbols from either the lower of higher values will result in a payout.

The wild symbol is a gold ‘Wild’ (triggered in the Wild Kraken feature), the diving helmet is also a scatter and the torpedo is an important bonus icon.

There are two special payout arrangements as you can see from the image to the right; just land four matching symbols in those green areas for a 5x or 10x prize.

Brace yourself as the Kraken approaches the reels and shakes them, reaching his tentacles out to change one or more random symbols wild for some potentially big wins.

This is triggered by landing five or more of the diving helmet symbols anywhere on the reels and you will now receive nine free spins for your trouble. During this round the Kraken Eye is added to the reels which acts an extra wild and there are treasure chest scatter symbols to collect which earn a prize even if just one lands.

There’s a torpedo meter in the bottom right hand corner and it decreases from fifty each time a torpedo lands on the reels. Once this reaches zero the Conquer The Kraken feature is triggered. You now descend to the depths to pick three of seven treasure chests held by the Kraken with a chance to reveal prize awards.

Eye Of The Kraken is a superb example of how to design a compelling slot and it has lots of easily triggered bonus features to enjoy. Some great graphics and sound effects and an RTP of 96.41% mean it’s definitely worth a look.