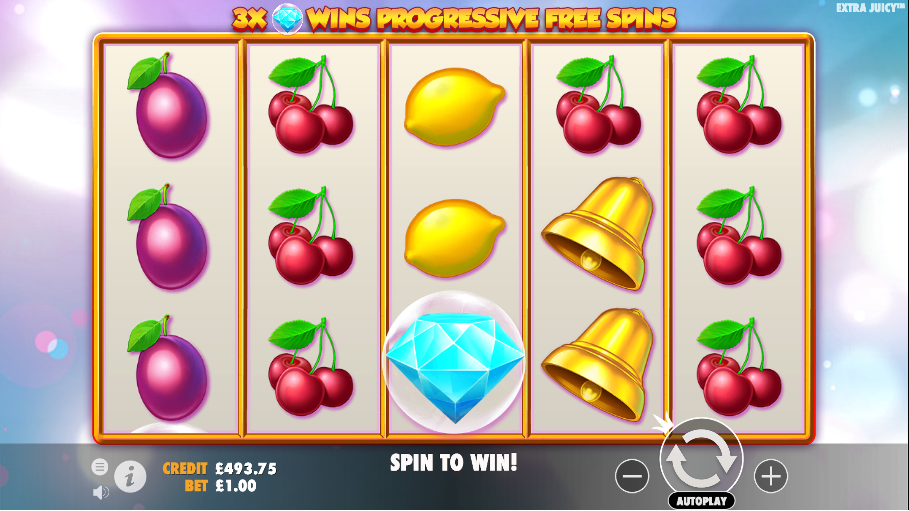 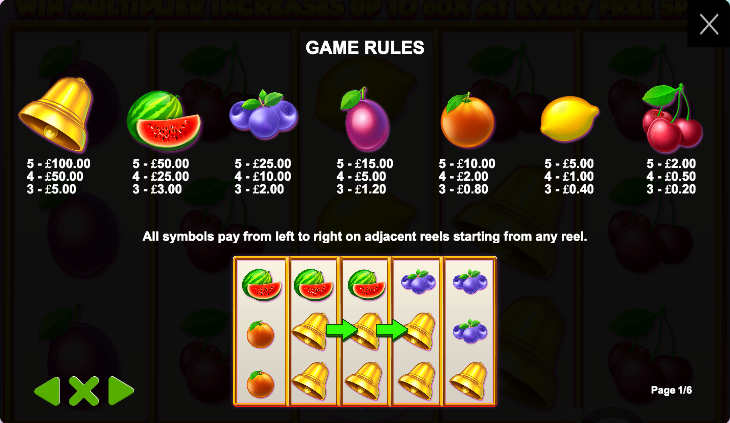 Featuring more pieces of fruit than a supermarket, Extra Juicy is an online slot machine developed by Pragmatic Play with a sunny outlook and a free spins round which offers increasing multipliers to brighten your day – find out how it all works below.

Extra Juicy is a five reel slot with three rows and ten fixed paylines although winning combinations can be formed anywhere on the reels as long as there are at least three matching symbols adjacent to each other on one of those paylines. There’s a colourful, hazy backdrop to the gold-rimmed reels and a jaunty soundtrack to accompany your gameplay.

Aside from the golden bell the symbols are all fruity and include watermelons, grapes, plums, oranges, lemons and cherries.

Unusually there is no wild symbol in Extra Juicy but there’s a diamond scatter symbol which is the key to the main feature as well as paying out independently.

These are described as Progressive Multiplier Free Spins for reasons we shall explain shortly but first let us say that this round is triggered by landing three of the diamond scatter symbols anywhere on reels one, three and five. Twelve free spins is the initial award and with each spin the multiplier value for any wins progressively increases by 1x, reaching 12x for the last spin.

Landing three scattered diamonds during this round award an extra twelve spins up to a maximum of sixty free spins with the multiplier continuing to increase up to a potential 60x.

Extra Juicy is quite a simple slot but an entertaining one nonetheless with its fruity animations on each winning spin; wins are frequent but quite small in this low variance game but it’s certainly one to try out.