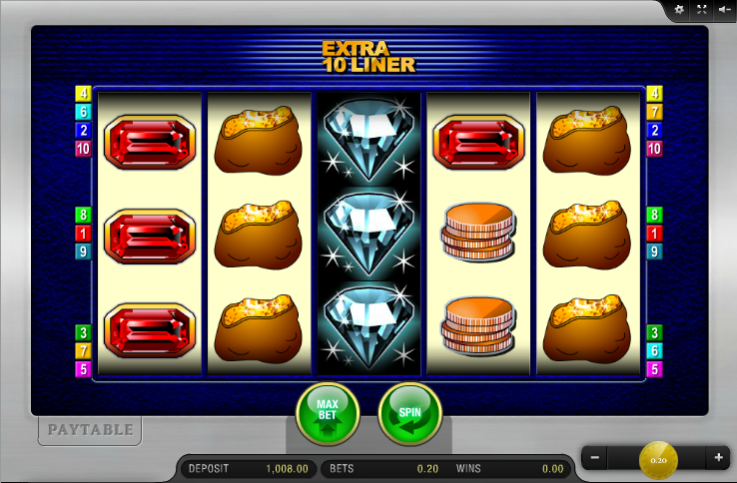 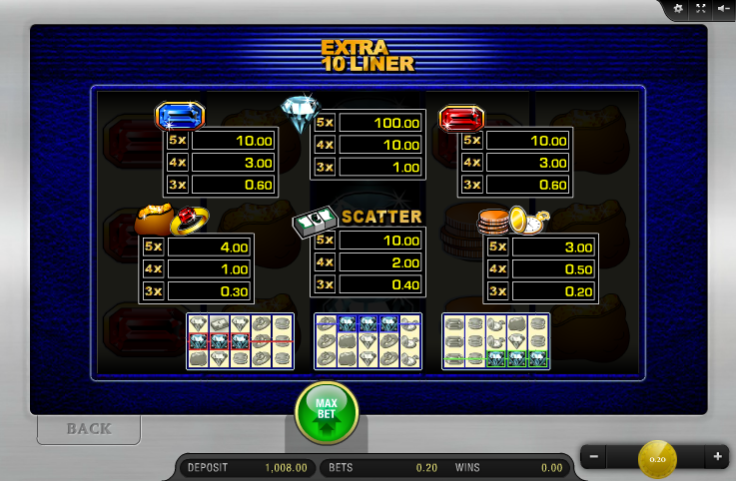 Merkur Gaming seem to specialise in developing some very basic online slots geared towards a certain reel-spinning demographic – bonus features are rarely to be seen but there’s usually a gamble feature to keep things interesting. Extra 10 Liner is another game along those lines which actually contains slightly more than meets the eye and you can read all about it in the review below.

Extra 10 Liner is a five reel slot with three rows and ten fixed paylines; the design is typically basic and the graphics are even more simple than normal – those reels are surrounded by a dark blue surface with no pretty extras.

There are eight standard symbols here and these comprise blue gems, a white diamond, a red gem, a bag of gold, a gold ring, a wad of banknotes, a pile of coins and a pocket watch. There are no wilds or other special symbols here but all the other icons can be stacked to help out with winning combos.

This probably wouldn’t normally qualify as a bonus feature but the paylines are slightly unusual in that winning combos are not just formed from left to right, they can be made from right to left as well; additionally combos formed just on the centre three reels count so there are a few different way to make some money here.

Despite our reservations’s about the simplicity of Extra 10 Liner it’s actually quite an addictive game, especially when the wins start to pile up. It also has a gamble feature which doesn’t feel as much of a rip off of some other developers’ versions. The RTP is 96.12%.