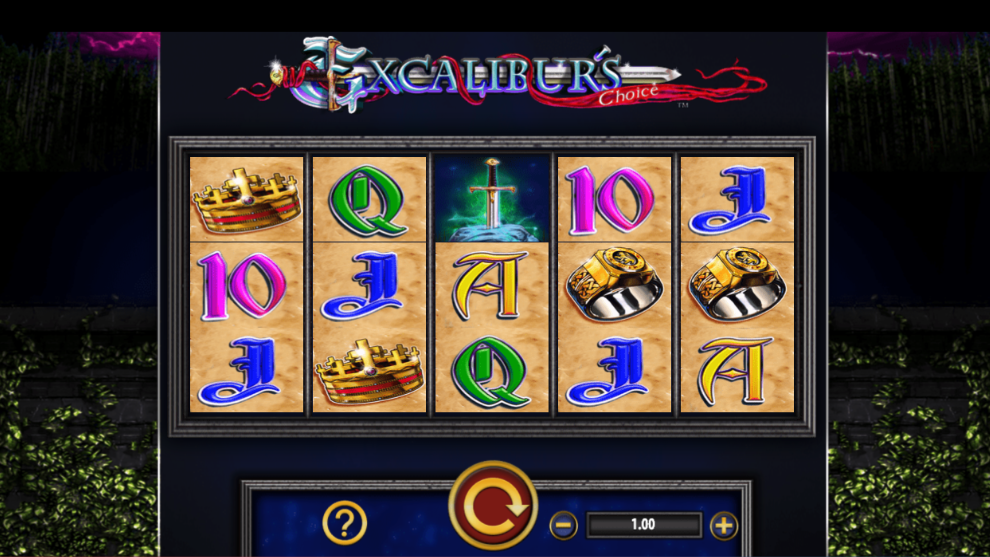 Anyone familiar with Arthurian legend will know that Excalibur conferred on its rightful owner sovereignty over Britain; whether it was given to Arthur by the Lady in the Lake or drawn from the stone is unsure but we do know that Excalibur’s Choice is an online slot based on this story and it’s developed by Barcrest.

Excalibur’s Choice is a five reel slot with three rows and ten fixed paylines; the design is quite basic but there’s a chirpy soundtrack to keep things moving along and some undergrowth behind the reels perhaps hiding the Holy Grail.

The higher value symbol include King Arthur, Camelot, a knight on horseback, a crown and a ring; 10, J, Q, K and A represent the lower values.

The wild and the scatter symbols are one and the same and that is of course Excalibur, wedged into a rock; it will replace all others to help form winning combinations.

This is triggered by landing at least three of the Excalibur scatter symbols anywhere in view for which you will receive an initial ten free spins. During this round one symbols selected from the paytable and when it lands it will expand to fill all positions on its reel, hopefully helping out with some bigger wins.

The good news is that it’s possible to trigger more spins by landing three more scattered swords again during this feature.

Arthurian legend is an excellent theme for an online slot but Excalibur’s Choice is rather basic when compared to others of the same genre and also other Barcrest games; give it a go if you like the subject matter but don’t stay for too long.