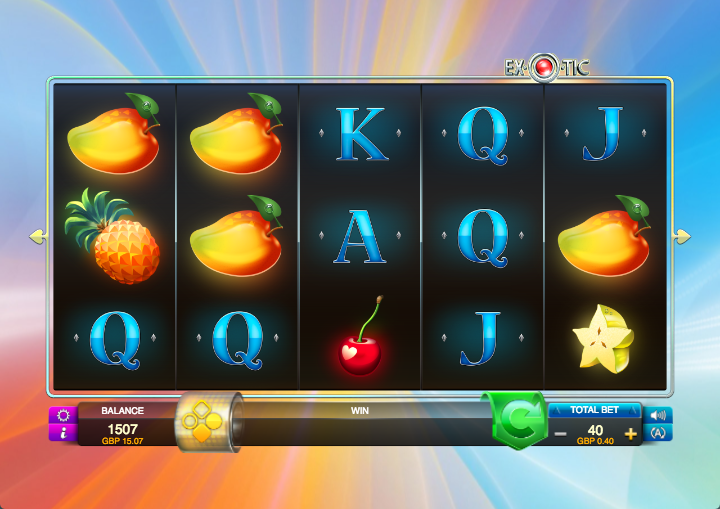 We’ve though long and hard about this online slot from gameiom but we can still can’t really work out why it’s called Ex-O-Tic; it’s certainly themed on some exotic fruit but that doesn’t explain the hyphens in the title – perhaps someone more intelligent than us will explain..

Anyway, Ex-O-Tic is a five reel slot with three rows and forty fixed paylines; it’s themed on some tasty fruit and behind the neat reels there’s a pastel explosion of colour from somewhere in the far distance.

The high value symbols are all pieces of fruit and include a watermelon, a pineapple, a jack fruit, a star fruit, a Kiwi fruit and a cherry; J, Q, K and A are the lower values.

The wild symbol is the silver bird and it appears only on reel three; it will substitute for all other symbols to create winning combos except for the ReSpins bonus icon; the bird will also move one place to the left or right if a bigger win is possible.

This is triggered by landing three or more of the ReSpins bonus symbols anywhere in view and the first thing you’ll see is each ReSpins symbol change into one of the following:

The spins will continue until those symbols contribute to a winning combination.

The name may be a little baffling but Ex-O-Tic has some glossy good looks and a clever bonus feature to aim for; it’s good fun and comes with an RTP of 96.00%.