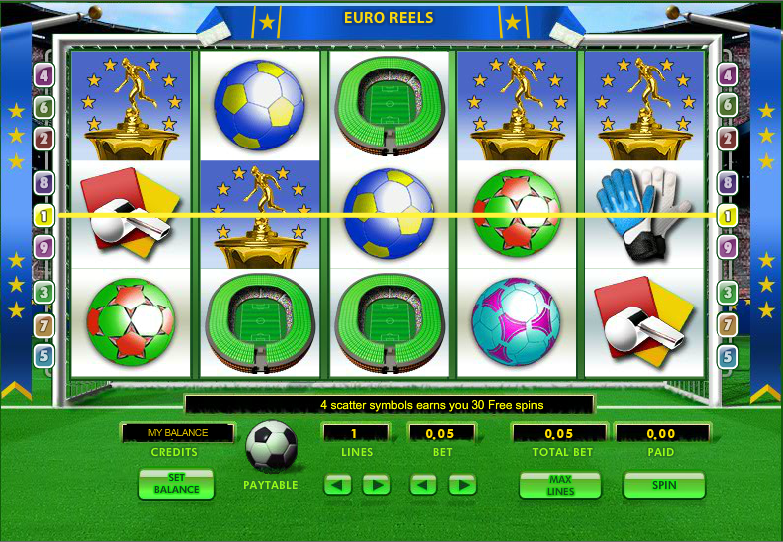 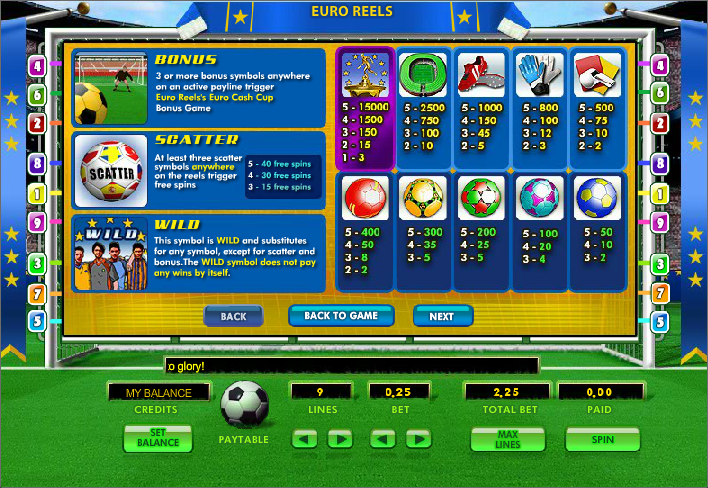 Sport-themed games always offer software developers the opportunity to put together some attractive games and football is no exception; the global game has featured in a number of our reviewed slots in the past and Euro Reels is another to add to the list. It’s by Random Logic and the good news is that it offers the chance to score goals and win money in the main bonus game.

Euro Reels has five reels and a mere nine paylines but don’t let that put you off; the flag of the European Union is used generously throughout this game and all the symbols are footie-related. They include five different coloured footballs, the referee’s whistle and cards, goalies gloves, football boots, an eagle’s view of a stadium and the gold cup awarded to the winner of this tournament.

A little gang of players represents the wild, there’s a football scatter and the bonus symbol is a ball in front of a goal.

This game is triggered by landing three of more of the bonus symbols an an active payline and this is your chance to score against the keeper. You’ll get five chances to shoot and each time you score you will win a prize – miss one though and the game is over. If you can score all five goals you’ll win the biggest prize available.

The spins are triggered by the football scatter symbols and landing three, four or five will earn you 15, 30 or 40 respectively.  During this feature it’s possible to re-trigger the spins an infinite number of times and it’s also possible to win the Euro Cash Cup.

Playing with minimum paylines will still enable you to trigger the free spins via the scatter symbol but if you want to have a shot at the Euro Cash Cup it pays to play more paylines because you can only trigger it on an active line.

As footie fans we always tend to like football-themed slot and this one’s not bad at all; it moves along at a brisk pace and the two separate bonus rounds should ensure more than one visit to this game.