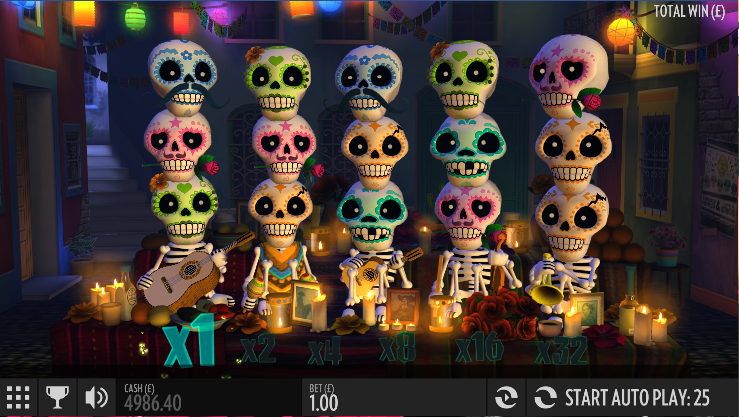 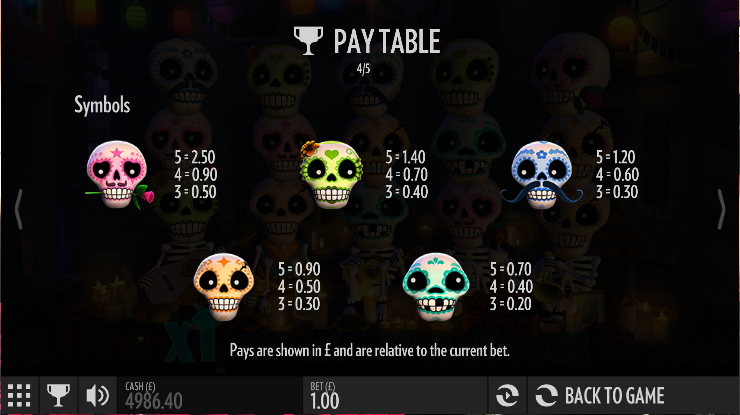 For those unfamiliar with the Spanish language, Esqueleto Explosivo translates as ‘exploding skeletons’ and what better name could there be for an online slot? It’s developed by a company called Thunderkick Games and the theme is the Mexican holiday ‘Day Of The Dead’. It’s a time when Mexicans celebrate and remember their dead relatives and it has absolutely nothing to do with zombies. 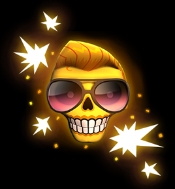 Esqueleto Explosivo plays out over five reels and seventeen fixed paylines. The action all takes place in a town square where Enrico Mortis and his mariachi band The Boners are playing, surrounded by candles and photographs of their dead family members.

There are only five main symbols and they are the different band members represented by coloured skulls – light blue, yellow, blue, green and pink. Each time a win is landed, the band will sing part of a Mexican song (this is better than it sounds).

The only special symbol is the wild and this is the yellow skull adorned with a massive pair of sunglasses.

Thunderkick calls this feature ‘dropping symbols’ but it’s similar to the ‘cascading symbols’ used by some other slots developers. Each time you land a win, those symbols involved will explode and be replaced by more dropping down from above, providing you with another chance of winning.

Each consecutive win will increase the multiplier for that amount as follows – 1x, 2x,4x, 8x, 18x and 32x. Lots of wins in a row obviously increases the multiplier quickly and it also generates a succession of songs.

The yellow symbol is more than just a standard wild; it substitutes for all other symbols but the big news is that it will explode all eight symbols next to it whenever it appears. This will also increase the multiplier in a similar manner to that described above.

There’s very little player interactivity here so we can’t offer much but we would advise keeping the sound on for the full Mexican effect.

This is a brilliant slot and we’d now like to check out Thunderkick’s other games. The graphics and animations are absolutely top notch and the sound complements the gaming really well.