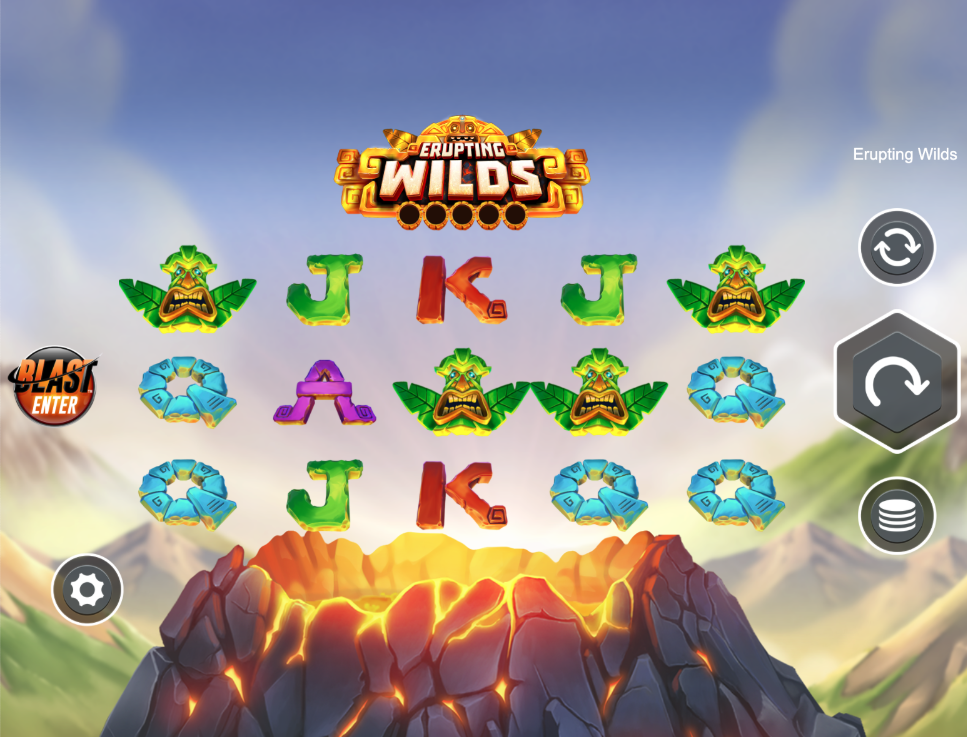 The bubbling magma of an active volcano sets the scene for this online slot from Live 5 Gaming; it comes with the title of Erupting Wilds and from £0.10 per spin it tempts players with Lave Reel Respins, wild features and free spins.

Erupting Wilds is a five reel slot with three rows and a starting point of 243 ways to win; the colourful symbols spin over the boiling hot peak of the volcano which threatens to disturb the calm blue skies behind.

The high value symbols are Tiki-style tribal masks in purple, blue, red and green while the lower values are J, Q, K and A in similar colours; the gold mask is wild and the red gem is the scatter symbol.

Wild symbols can be ejected at random from the volcano and onto the reels, adding them in random positions on reels two, three or four or creating an expanded lava reel five positions high. If a wild symbol then lands on the lava reel it will lock in place and another reel will be selected as the lava reel, allowing the process to continue.

If reels two, three and four are all expanded lava reels then there are 3125 ways to win at that point.

Landing three, four or five or the red gem scatter symbols anywhere in view will award 6, 10 or 16 free spins respectively; more spins can be won during this round in the same way with two available for just two scatters.

During the spins there are five rows in play all the time and on each spin at least one of the centre three reels will have up to five wilds added to it.

This is an extra mini-game which will cost the same as your stake and there’s two parts to it:

If you lose in the first part there’s a 50/50 chance that the coloured section will increase in size for your next go. Entering The Blast you can also choose from Super, Mega and Ultra difficulty settings – the coloured segments get progressively smaller but if you hit them you’ll play the spins with all Js removed (Super), Js and Qs removed (Mega) or Js, Qs and Ks removed (Ultra).