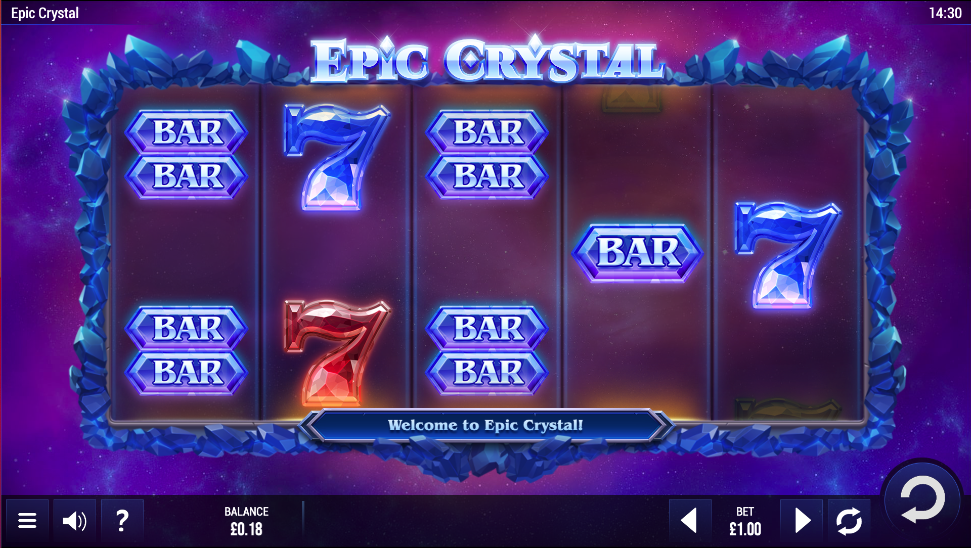 If we can’t own any expensive jewels in real life then perhaps the next best thing is to try out an online slot themed on sparkling gems; this one’s called Epic Crystal, it’s developed by Epic Industries and from £0.20 per spin it tempts players with wild multipliers, free spins and the Crystal Prize Wheel.

Epic Crystal is a five reel slot with three rows and twenty fixed paylines; those gem-encrusted reels are floating in front of a purple-hued night sky to a add a bit of atmosphere.

There are just five standard symbols and they’re a familiar bunch – single, double and triple bars along with blue and red sevens; landing mixes of bars or sevens will also result in a win, albeit a smaller one. The wild is the ‘2x Wild’ gem which will multiply any wins by 2x and the large purple crystal is the bonus symbol.

Landing at least five of the purple crystal bonus symbols anywhere in view will award an initial seven free spins with five more available in you can repeat that feat when the spins are underway.

Before the spins start you’ll get to spin the Crystal Prize Wheel a number of times depending on how many triggering symbols there were:

Each spin is worth a prize value and these are totalled if there was more than one spin – this is the Crystal Prize and when the spins start it will be awarded every time the bonus symbol lands.

Epic Crystal is a very good-looking slot which rises above the standard fare largely due to the Crystal Prize Wheel in the free spins feature; you may only get seven spins but they should be a bit more valuable. There’s also an above-average RTP of 96.15%.