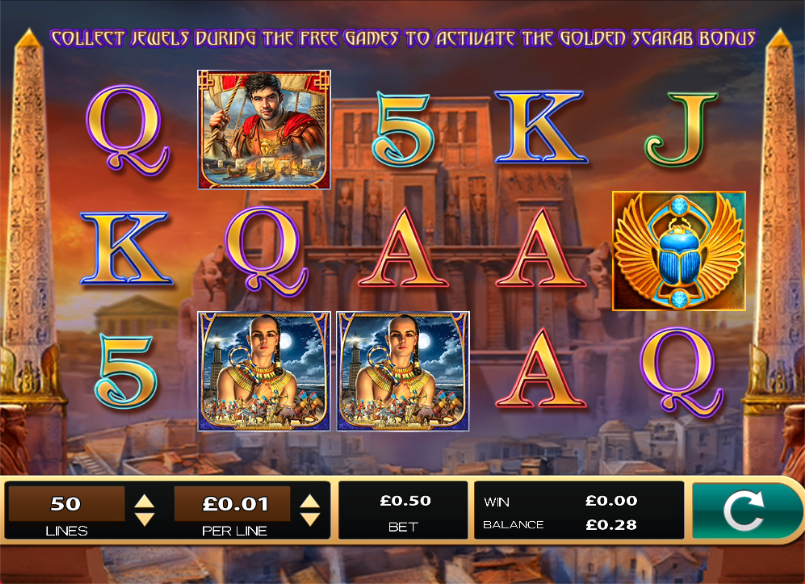 Let’s now return to Ancient Egypt once more to visit the gods and decipher the hieroglyphics in this online slot machine from High 5 Games; it’s called Empress of the Nile and it comes with free spins and Super Symbols.

Empress of the Nile is a five reel slot with three rows and fifty fixed paylines; behind those floating symbols a vast temple rises up from the surrounding buildings as the sun sets in the distance.

The four higher value symbols include the Empress, the Roman, the ship’s captain and the god; 5, J, Q, K and A make up the lower values. Winning combos containing the four characters can be formed from right to left as well as from left to right.

The wild symbol appears on reels two, three and four and will replace all others to help form winning matches except for the Golden Scarab scatter icon.

Each pick will reveal a multiplier of your total bet up to 20x.

The Super Symbol occurs during the free spins and you will see reels two, three and four get locked together and contain large, 3×3 symbols which will hopefully help out with a win. Super Symbols are the four high value symbols plus the wild.

Empress of the Nile comes with a little more complexity than the average slot and we like the collection aspect of the free spins round which should more or less guarantee a nice win. If the Egyptian genre is for you then this won’t disappoint.