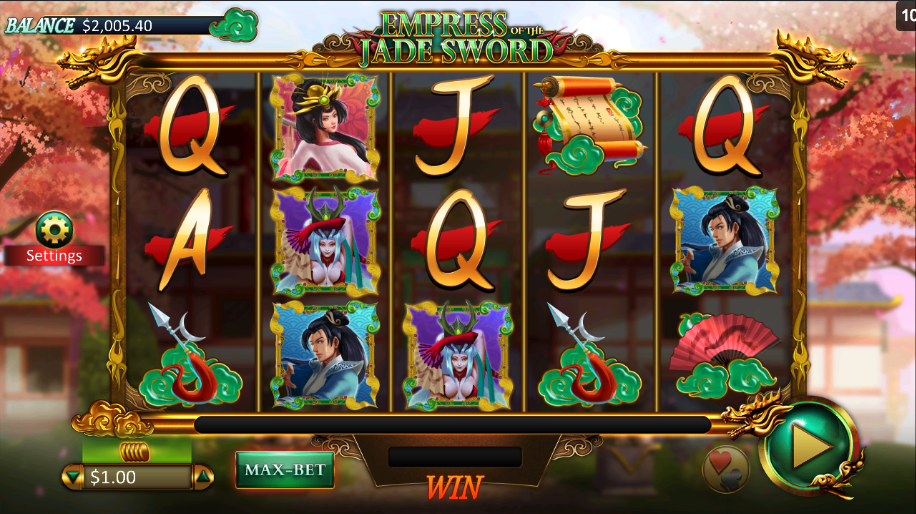 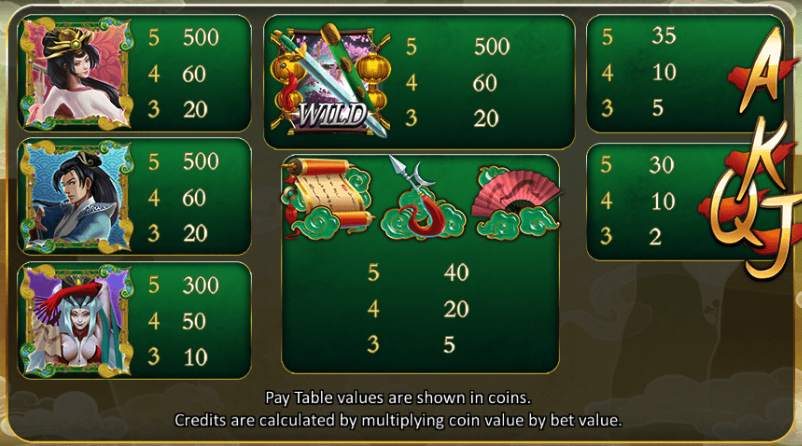 The exotic and distant Orient is our destination this fine morning as we run the rule over an online slot machine themed on the Empress of the Jade Sword; it doesn’t appear to be based on any actual Chinese legends but that doesn’t matter – it’s developed by Bla Bla Bla Studios and and you can find out all about it here.

Empress of the Jade Sword is a five reel slot with three rows and twenty fixed paylines; an ornate golden frame tipped with dragon heads borders those reels while blossoming trees and buildings can be seen through the background haze.

Three characters from this story are the highest paying symbols and then there’s a scroll, a spear and a fan; J, Q, K and A make up the lower values.

The Jade Sword is wild and it will replace all others to form winning combos except for the temple and ninja bonus symbols.

If the Jade Sword wild contributes to a winning combination on any spin you will receive a free respin with the wild locked in place; if the scroll, spear or fan appear next to the wild on that spin then they will also act as wilds.

This is triggered by landing three or more of the temple scatter symbols anywhere in view for which you will receive the following:

There are no extra features during the spins but they can be retriggered by landing three more scatters.

Trigger this by landing three of the Ninja bonus symbols on reels one, three and five and you will be prompted to pick from the horde of Ninjas on display; cash prizes and multipliers will be revealed here.

Each standard win can be gambled using the hearts/clubs button below the reels and this is a red/black, 50/50 punt to try and double your money.

Empress of the Jade Sword is an intricately designed slot with various attractive features but we particularly like the Jade Wild bonus which has the potential for big wins when it hits; it’s a very playable addition to the long list of oriental-themed games and it comes with an RTP of 95.23%.