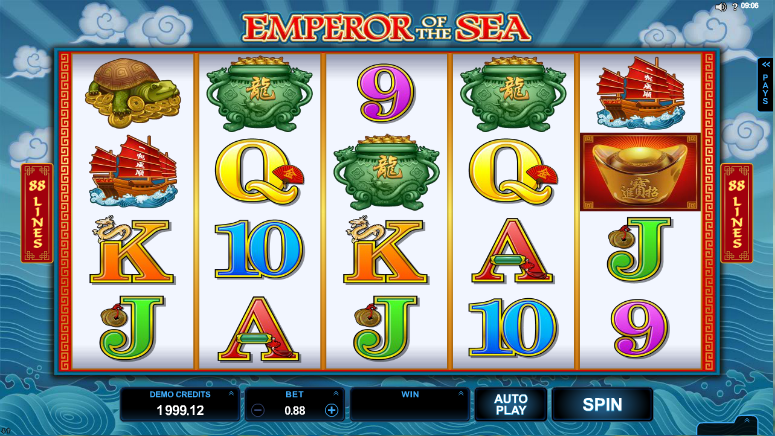 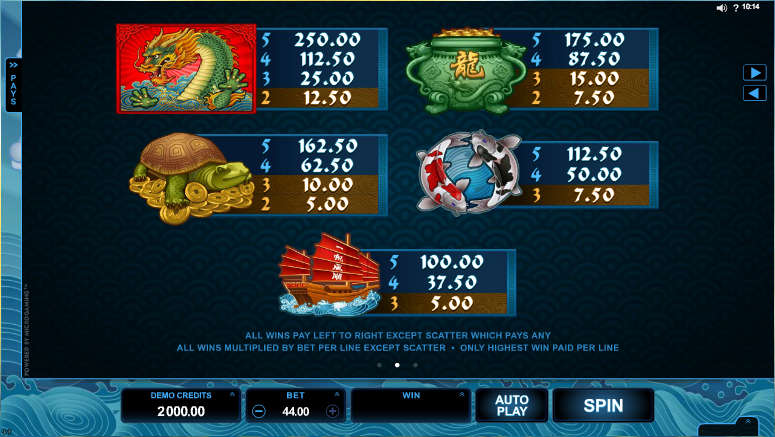 Fresh from the development studios of Microgaming is this colourful online slot in which themes collide to create an experience with both nautical and oriental influences. The name of this game is Emperor of the Sea and it it features an enhanced free spins round – find out all about it below.

Emperor of the Sea is a five reel slot with four rows and eighty eight (lucky) paylines; behind those reels there’s a stylised Chinese representation of the ocean while your gameplay is accompanied by some gentle Chinese music.

The five higher value symbols are all stylised Chinese objects and they include dragons, pots of gold, a turtle relaxing on some gold coins, some Koi carp and a Chinese junk; 9, 10, J, Q, K and A represent the lower values.

There are three payline potions available here – 38, 68 and 88, the choice is yours.

The Emperor of the Sea logo is wild and will substitute for all others to make winning combos except for the gold ingot scatter; the wild will also appears stacked in the base game and the free spins round.

This is triggered by landing three or more of the gold ingots anywhere in view for which you will eight free spins; while this might not seem an overly generous amount there are two extra features available during this round to liven things up a bit:

Emperor of the Sea is a perfectly playable slot but it lacks a little zest unless you can regularly trigger the free spins round; get there and there are certainly some big wins to be had. There’s a slightly higher than average RTP of 97.00%.