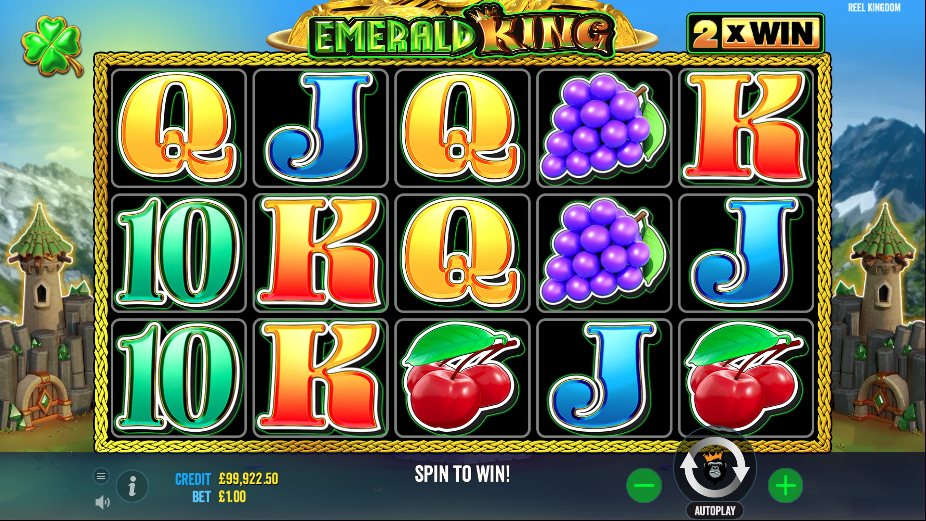 A trip to the Emerald Isle awaits those online slot players keen to try out this Irish-themed game from Pragmatic Play – it’s called Emerald King and it tempts players with win multipliers, giant symbols and a feature which introduces lots of mini slots to play.

Emerald King is a five reel slot with three rows and twenty fixed paylines; some ornate golden reels float in front of the mountain empire of the king where green-tiled towers pierce the drifting clouds.

There are very few symbols in play here and they include the Emerald King, cherries, grapes and 10, J, Q and K. The pot of gold is wild and it will replace all other symbols to help[ form winning combinations. Symbols may also land as 2×2 or 3×3 giant icons.

The current win multiplier is shown above the reels and it will increase on every consecutive non-winning spin; it resets to 1x on a win or (if you’re unlucky) at random also. Changing your bet level will also reset it to 1x.

Reels can appear with a green background and this feature is triggered is if all five reels become green on the same spin; up to fifteen tiny slot machines will now appear and Spins independently – their symbols are red, yellow and blue sevens with a top prizes of 20x the stake. If a particular machine spins with a win it will spin again until there are no more wins and the round is over.

The green backgrounds can be held over between spins and this will be marked by a golden horseshoe at the bottom.

Emerald King looks a little different (and perhaps a little more basic) than Pragmatic Play’s usual fayre but behind those big symbols there’s an entertaining slot with some clever bonus features; the cheerful leprechaun king will also raise a smile.