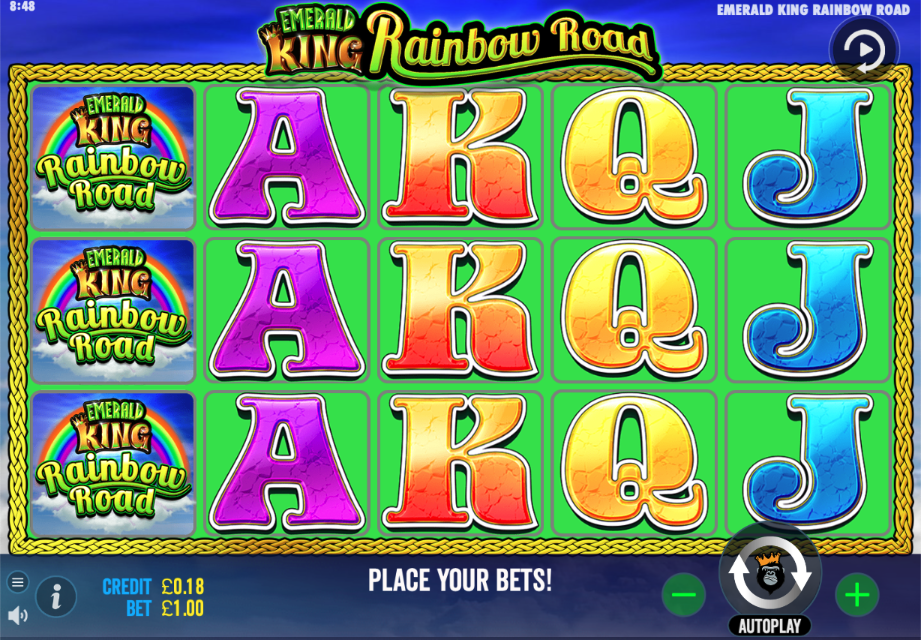 If you’ve previously enjoyed an online slot called Emerald King from Pragmatic Play then behold this new and improved version which comes with the title Emerald king Rainbow Road; it retains the same features of its predecessor but adds more into the Irish mix.

Emerald King Rainbow Road is a five reel slot with three rows and twenty five fixed paylines; rainbow flank the Celtic reels which float against a backdrop of white clouds and blue skies.

There are just six standard in play here and they are the games’ log and then 10, J, Q, K and A; the four leaf clover is wild while the leprechaun and the pot of gold are the special symbols.

Landing at least three of the leprechaun scatter symbols anywhere in view will kick this feature off and you’ll get to spin a mini slot machine which will help you progress around a trail; you can move up to six positions to win cash prizes or trigger the Mini Slots bonus game but the round is over if you land on ‘Collect’. Reaching the final position will award a ‘Big Money’ stake multiplier of between 50x and 20,000x.

This is triggered by landing at least three pots of gold anywhere in view and all you have to do now is click those pots to eliminate them with your prize being the cash value behind the final one. The more triggering symbols, the higher the potential prize (up to 200x the stake) and there’s also a chance of activating the Rainbow Road feature from here.

The background of some reels will occasionally appear green and if all reels are green on a particular spin then this feature will be activated; up to five mini slot machines will now spin in turn and continue to spin until they stop winning.

There are loads of features hiding behind a simple exterior in Emerald King Rainbow road and it’s certainly a step forward from the original version; it’s entertaining and definitely worth some spins.