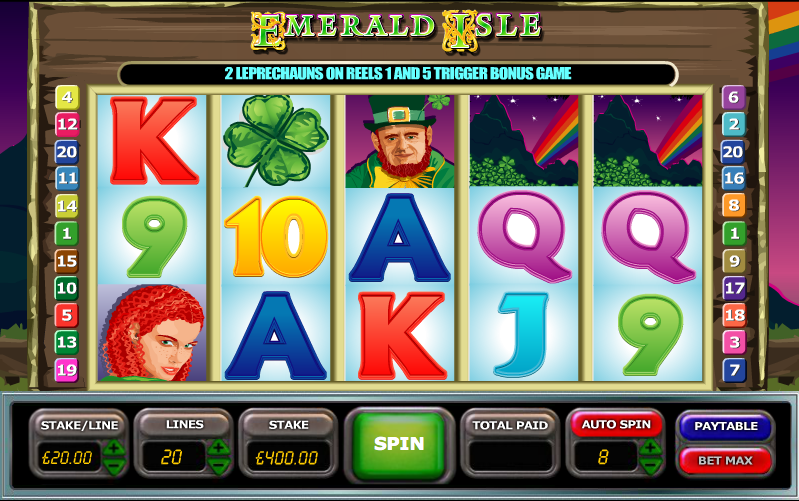 As a slots player, you will be well aware that a phrase you don’t hear very often is: “I know what we need – another Irish-themed game featuring rainbows, pots of gold and four leaf clovers“.  However that’s exactly what we have here, it’s from Cryptologic and it’s called Emerald Isle; it probably doesn’t need much explanation but read on regardless to find out more.

Emerald Isle is a five reel and twenty payline game and it’s no surprise that the narrow view behind the reels contains a rainbow. The bog standard (no pun intended) low value symbols are the usual range of playing cards icons but the ‘fun’ really starts with the higher value symbols. Can you guess what they are? Almost certainly you can – there’s a four leaf clover, a pot of gold and a red-haired Irish girl.

The scatter symbol which activates the feature is a rainbow (with some clovers in the foreground) and the wild is a grim-looking leprechaun who triggers a feature of his own.

Three of the rainbow symbols appearing from left to right (it’s not quite a scatter symbol) on the reels will win you ten free spins. During these spins, any wins will be tripled and you’ll be delighted to know that the feature can be re-triggered by landing more rainbow symbols.

The leprechaun looks slightly more cheerful when he forms a winning payline and to trigger this particular bonus you will need to land him on reels one and five.

You will now get to play a mini-game during which you must find three matching symbols from up to three bonus rounds. A prize of up to 100x your triggering bet is available if you can find three of the most valuable symbols; if you fail to make the required matches you will win your line stake back.

The only reason you may want to play this slot is if you are trying to complete the collection of Irish-themed games; there are far better ones available and you can see five of our favourites by clicking here.