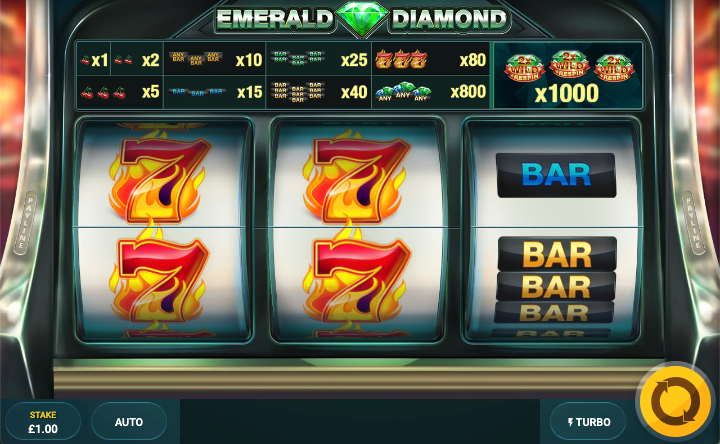 Three reel online slot machines may not be as popular as they once were but there are still developers around willing to design them for those of us who prefer some simplicity in out gaming; Emerald Diamond is one such example, it’s developed by Red Tiger Gaming and its chrome features hide some clever wild features.

Emerald Diamond is a three reel slot with two rows and just the one payline; we’re playing on a recreation of a physical machine with a chrome frame and the paytable displayed above the reels. Where we might normally see a casino interior in the background there are instead some bright lights.

There are just standard symbols and they’re all quite familiar – flaming red sevens, triple gold bars, double green bars, single blue bars and cherries. Mixed bars will pay 10x your stake while the cherry acts as a scatter symbol, paying 1x for one in view or 2x for two.

The blue and emerald diamonds are wild and will substitute for all other symbols (but not each other) to help form winning combinations.

The bonus features such as they are revolve around the two wild diamonds and they will help you out in the following way when they land:

It may only have three reels but Emerald Diamond is a very playable slot, mostly because of the wild features and respins which hit regularly during gameplay. It should offer enough for all players, not just three reels enthusiasts.