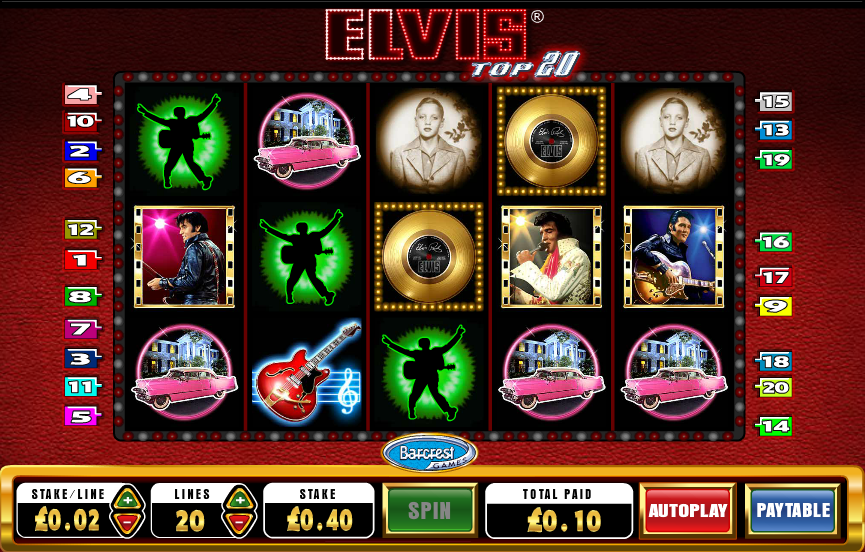 Elvis Top 20 is not the only online slot we’ve played with Elvis Aaron Presley as it’s subject but it’s the first one we’ve played from Barcrest. IGT and WMS Gaming have both designed some entertaining games based on the King but one more from a different developer can’t hurt.

Elvis Top 20 is a five reel and twenty payline game which features some genuine Elvis tunes, lots of glitzy lighting and plenty of items from his life. The symbols include an image of Elvis as a boy, a famous silhouetted pose, a pink cadillac, three different views of Elvis performing, a big Elvis logo and a crown which also doubles as the wild.

There are three different bonus games here and they are triggered by either a jukebox, a red guitar of a gold disc – all of which are scatters.

Land three of the guitar scatter symbols anywhere on the reels and this brief game will automatically start. Each guitar will play a tune in turn, adding some cash to the prize while it does so; when the music is finished the prizes are totalled up and awarded.

Three or more of the gold discs in any position on the reels will kick this feature off; it’s pretty simple – the wheel will spin and then stop on a particular value which will then be awarded to the lucky player.

This is another simple one and it’s triggered by landing three or more of the jukebox symbols anywhere on the reels; pick one which will then play a funky tune after which you will be awarded a cash prize.

Everything is focused on the scatter symbols here so if you like playing for the features you don’t need to play with all paylines active. Especially handy for low rollers.

This is a great slot which is only helped by some original tunes as the background music; three different features mean that there’s always something to play for so this is well worth checking out. Elvis fans may also like Elvis The King and Elvis The King Lives.