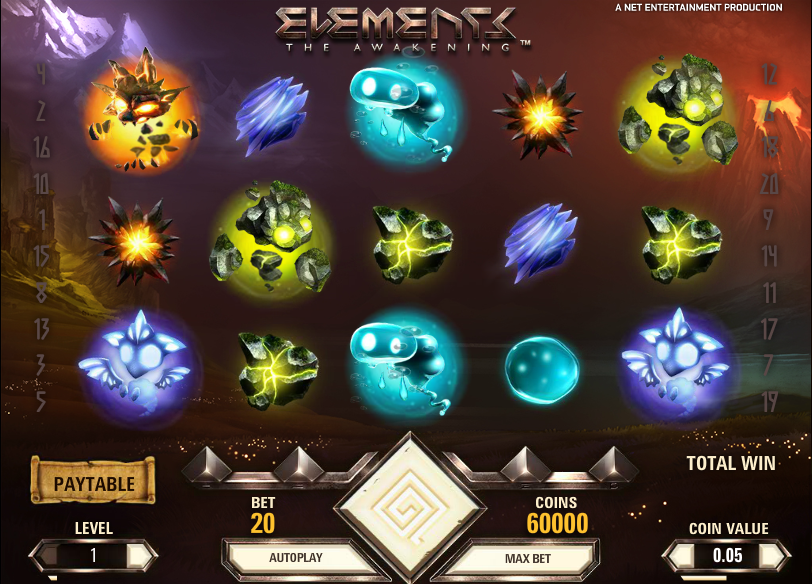 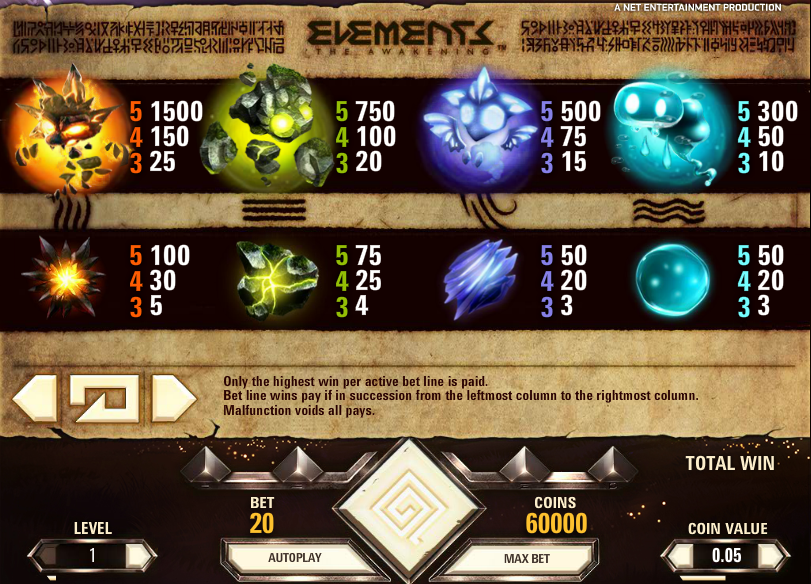 Net Entertainment produce some of the most compellingly beautiful online slots we’ve ever encountered and Elements The Awakening is just one more example of what can be achieved in this genre.  Net Ent have carved themselves out a creative niche which features slots with some of the most arresting graphics in the industry and this game is no exception.

Elements is a space-themed slot with five reels and twenty fixed paylines and each symbol is stunningly rendered.  There are no playing card symbols here; they’re all theme-related and there are eight in total, small and large versions of the same one.  So there’s a blue orb/water creature, dark blue air symbol/air creature, green earth rock/ green rock creature and finally a fiery rock/fire creature.  These graphics symbolise the elements water, air, earth and fire and the larger ones are the more valuable.  There’s also a wild symbol which is a metallic cube.

As with many Net Ent slots, the bonus game is an innovation in itself and it’s all to do with the way the game works.  This has a ‘collapsing’ feature which means that if you spin a winning combo, those symbols in that combo will disappear, making room for more symbols to fill the gaps.  In this manner it’s possible to make more than one combo on the same spin.

If you can make four combos from four collapses then the energy meter underneath the reels will fill up and trigger the bonus feature, of which there are four – one for each element.  The one you play depends on which of the quadrants is dominant on the meter when the bonus is triggered.  The player will win ten free spins/free falls and the games differ as follows:

We don’t want to keep banging on about the graphics but the four intro movies to the Free Fall bonus games are really something to behold – check it out.

The combination of charming graphics and creative gameplay make this a real winner; you can bet as little as €0.20 on the twenty fixed lines up to a maximum of €100.00.