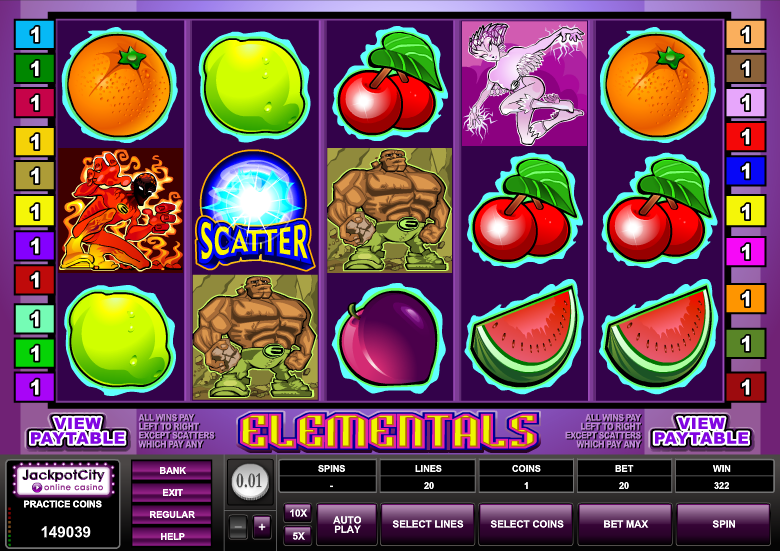 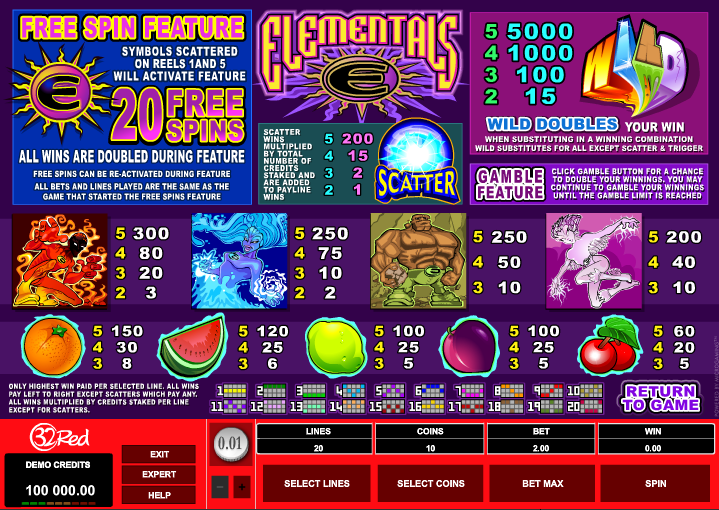 There’s a real sense of deja vu when playing the Elementals online slot; you feel as if you’ve played it before even though you know you haven’t and that’s probably because when you first load it up you’re confronted by a character symbol which looks just like The Thing from The Fantastic Four. This however is an Elemental, the spirit of earth and one of four described by Paracelsus in the 16th century. He’s called Gnome and the others are Undine, spirit of water, Sylph, spirit of wind and Salamander, spirit of fire.

Elementals is a five reels and twenty payline slot which uses these Elementals as it’s central theme; those symbols are really well drawn and certainly reminiscent of comic book art. Aside from those four symbols there’s also a range of fruit to represent the lower values.

This is the main bonus feature in this game and you’ll need to land the big ‘E’ anywhere on reels one and five to trigger it.

You will now receive a generous twenty free spins (as you can see from the video below) and the good news is that all wins landed during this feature will be doubled. You can also re-trigger more spins by landing more giant ‘E’s.

This is not a feature as such but whenever you land a winning combo in the base game which includes the wild symbol, the prize among will be doubled.

Fancy gambling that last win? You can do that by clicking the ‘Gamble’ button and then choosing whether you think the next card drawn will be red or black. Each win doubles your money but guess wrong and you’ll lose it all. There’s a five win limit during this round.

Feel free to have a gamble every now and then but don’t expect to win five times in a row every time – that’s the way to fritter away your money. Take that one gamble win and head back to the base game.

There’s not much new here but it’s not bad if you want to try a different game; it has some interesting sound effects and the free spin round seems to get triggered fairly regularly.