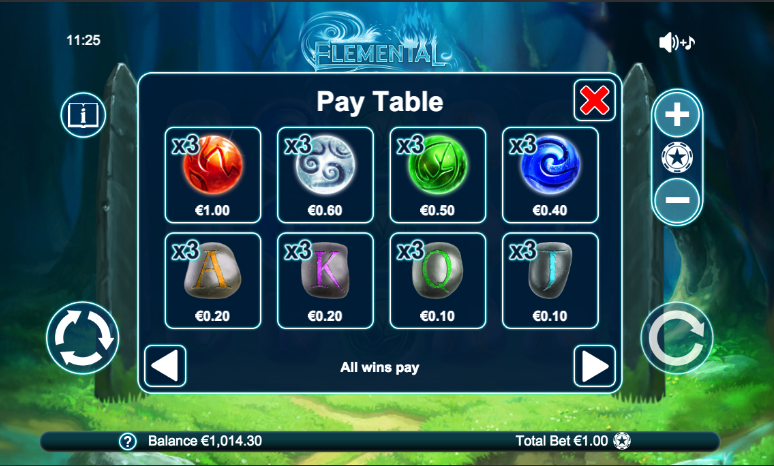 A world of fantasy and relaxation awaits those willing to check out this online slot from Leander Games; it’s called Elemental and it’s themed on those basic elements of fire, water, earth and air – find out how it all works below.

Elemental is a five reel slot with three rows and twenty fixed paylines; all the action takes place in a gloomy forest location with the symbols floating between two stone pillars above an oddly healthy patch of grass.

In this game there are just twenty paylines but wins can be formed anywhere on reels as long as there are three matching symbols in a row.

The four higher value symbols are the four elements – fire, air, earth and water – while the lower values are J, Q, K and A neatly carved into polished stones.

The wild symbol is a nicely stylised sun which will substitute for all others to help form winning combinations; it’s also the key to this games only feature which is explained below.

The wild symbol is the key to all the good stuff in Elememental because it appear on all reels and each time it lands it will expand to fill all positions on that particular reel. Any payouts will then be evaluated and it will lock in place for one more spin, which is free. Any final payouts will then be calculated but any more wild symbols landing will continue the process up to a maximum of four free spins.

Elemental is a fairly simple but entrancing slot with some smooth gameplay and a bonus feature which triggers regularly and can award some big win, even though this is a low variance game. It comes with an RTP of 96.05%.