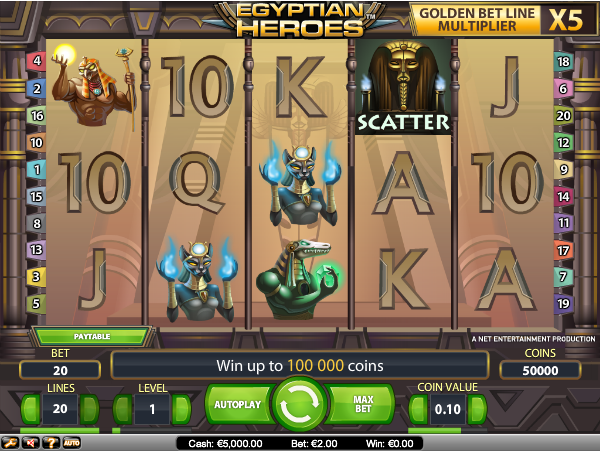 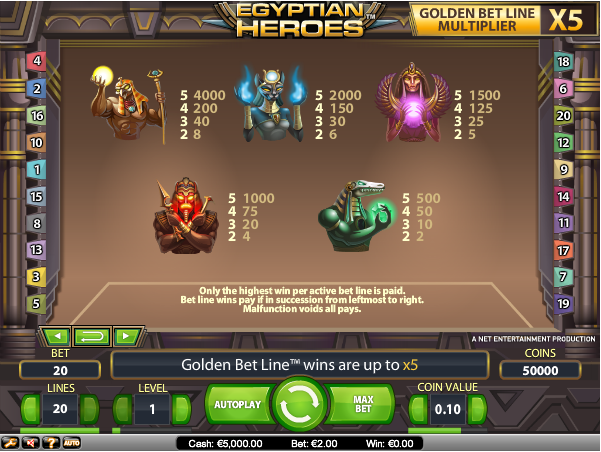 We’ve reviewed plenty of ancient Egyptian-themed slots on this website and it seems like a theme which engenders some creative ideas.  Net Entertainment were behind the slightly older Ramesses Riches online slot and the same software providers are behind Egyptian Heroes.

For us, Net Entertainment always seem to be slightly ahead of the game when it comes to impressive graphics and this game has one or two examples of that quality.  Egyptian Heroes, which features five reels and twenty paylines, actually has a modern look to it while also featuring ancient godlike symbols from up to 5000 years ago.

The basic low value symbols are playing cards (10, J, Q, K, A) but the higher value symbols are all impressively rendered and there are five gods which we’ll differentiate by their colour – green, red, purple, blue and gold.  The scatter symbol is a type of sphinx head while the wild symbol is a pyramid.

This is a bonus feature which we haven’t seen on any other machines previously; on each spin one payline is marked out as a golden one and if you land a winning combination on that line it will be subject to a multiplier between 1x and 5x.

The pyramid wild symbol will expand to cover all the symbols on that reel when on reels two, three or four and in a winning combo, giving the player extra chances to win.  You’ll also get a nice graphic with a swirling red cloud above the pyramid.

Three, four or five sphinx scatter symbols anywhere on the reels will win the player 10, 15 or 20 free spins; during this phase you’ll also notice a sticky, expanded wild on reel three throughout.  You can’t win any more free spins during this bonus round but wilds on winning combos on reels two and five will expand.

The Golden Bet Line Multiplier marks this Net Ent slot out as a cut above most and the top notch graphics are the icing on the cake.  There are of plenty of betting options from €0.01 per payline up to €100.00 with everything maxed out.