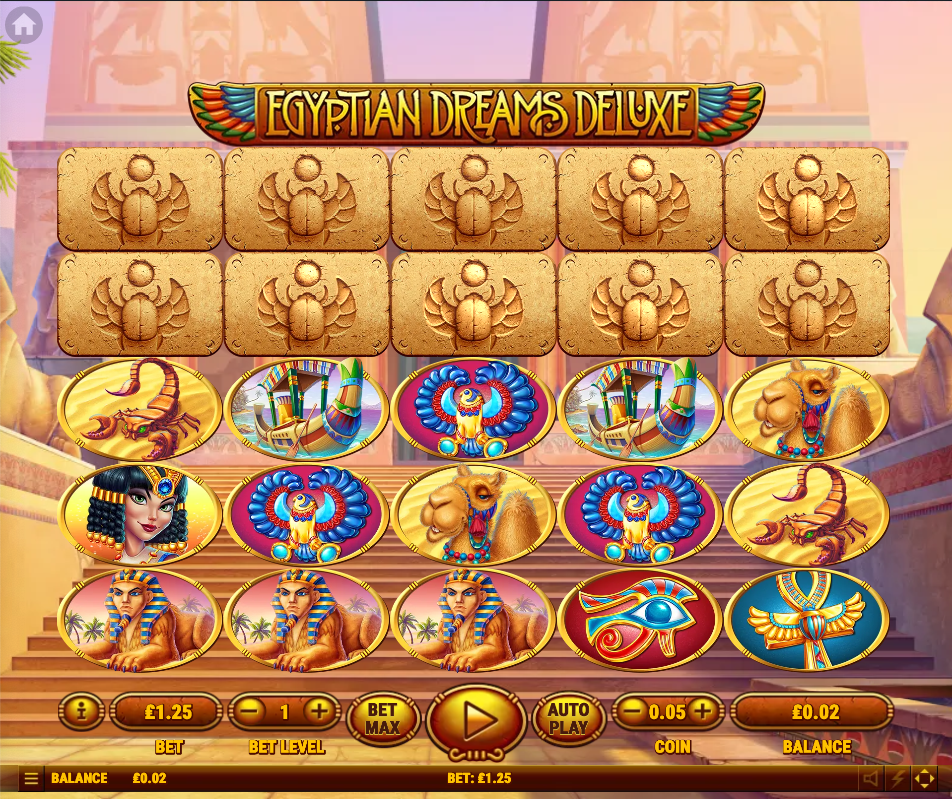 North Africa is our destination once more as we visit the monuments and pyramids of this ancient civilisation in Egyptian Dreams Deluxe; this online slot is developed by Habanero Systems and it offers playes base game respins, free spins and up to 3125 ways to win.

Egyptian Dreams Deluxe is a five reel slot with three rows and 243 ways to win initially; there are two extra rows covered above the others and all those symbols float against backdrop of a vast temple baking under the desert sun.

The theme related symbols include Cleopatra, the Sphinx, the Eye of Ra, the royal barge, a scroll, a camel, a hairless cat, a golden ankh, a green-eyed scorpion and a scarab.

The crook-wielding god is wild and he’ll replace all standard symbols to help create winning matches; the huge pyramid is the bous icon.

Every time a wild symbol appears directly below one of the covered symbols it will be uncovered and take part in the gameplay, increasing the number of paylines available; if you can then uncover all the extra spaces you’ll receive 30 free spins with a total of 3125 ways to win.

Landing two, three, four or five of the pyramid bonus symbols from left to right will award 10, 15, 20 or 30 free spins respectively; if two, three or four pyramids trigger this feature they will lock in place and award one more spins to try and land another. Three more pyramids during this feature will award an extra ten spins.

Of course the spins can also be triggered via the unlock feature.

Egyptian Dreams Deluxe is all about the free spins and the various ways they can be won; the Unlock Feature is also a clever touch and this slot is a worth successor to Habanero’s original Egyptian Dreams game.