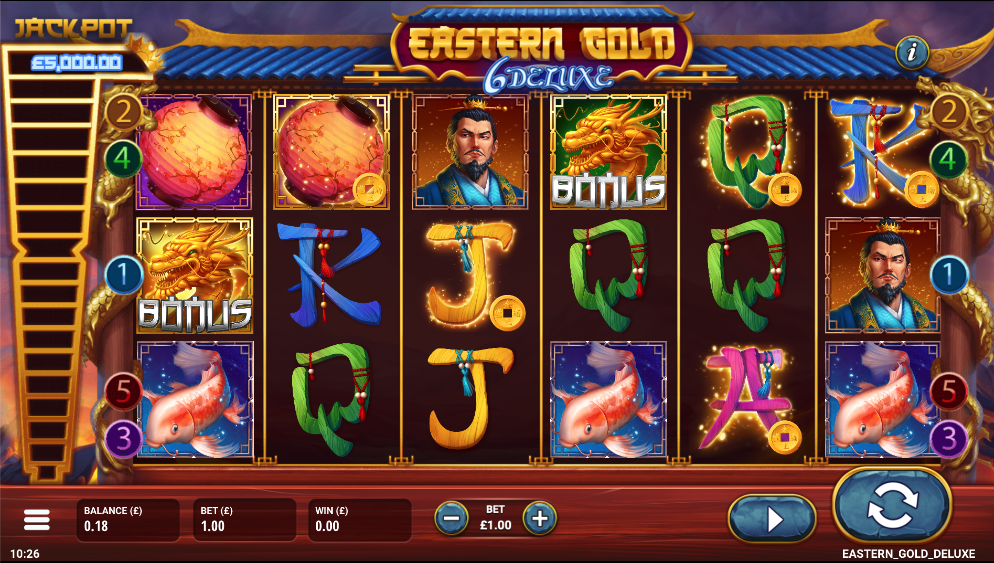 The further east you head, the more mysterious and inscrutable the culture becomes until finally the Silk Road ends and you find yourself in China. What are we going on about? Who knows but what we can say is that this is an online slot themed on that ancient land – it’s called Eastern Gold Deluxe, it’s developed by Gamevy and from just £0.05 per spin it offers players giant symbols, free spins and a jackpot prize of 5000x the stake.

Easter Gold Deluxe is a six reel slot with three rows and five fixed paylines; there’s a fiery landscape behind the temple on which those reels spin with the jackpot meter displayed on the left hand side.

High value symbols include the dapper emperor, the Koi carp and the paper lantern; J, Q, K and A are the lower values and the golden dragon is the bonus symbol. There are no wild symbols in this game.

Each symbol on the reels may land with a golden frame or sparkling with gold and the they do they’ll each contribute towards filling up the meter on the left hand side; however it resets between spins so you’ll have to land gold symbols on every reel to grab the 5000x jackpot prize.

Landing three, four, five or six of the golden dragon bonus symbols anywhere in view will award 10, 15, 20 or 25 free spins respectively; during this round one of the standard symbols will be selected on each spin to land as a giant, 3×3 icon, filling up reels two, three and four in the process and making bigger wins a bit easier.

The vast land between Urumqi and the East China Sea is fertile ground for online slot developers and Eastern Gold Deluxe adds to the mix nicely with its free spins, giant symbols and jackpot opportunities; there’s 5000x the stake waiting for the very luckiest players.

Yes! Free spins with giant symbols and a jackpot prize of 5000x the stake.

The Return To Player percentage for Eastern Gold Deluxe is 95.00%.

How To Win On Eastern Gold Deluxe?

Land at least three matching symbols or wilds on an active payline starting from the left hand side; trigger the free spins or land twenty gold symbols for the jackpot.

Where can I play Eastern Gold Deluxe then?