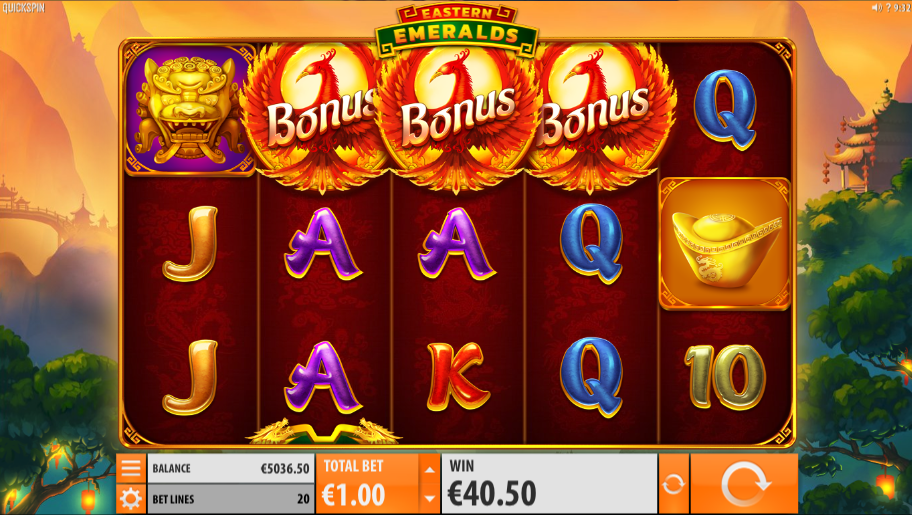 It’s time now to take a virtual trip to the Far East and this is a journey which will already be familiar to online slots fans; here we’re in the company of Eastern Emeralds, a release developed by Quickspin Gaming with free spins and multiplying wilds.

Eastern Emeralds is a five reel slot with three rows and twenty fixed paylines; a slender gold frame borders those reels while the backdrop is a spectacular vista of impossible bridges over gorges, lofty mountains lit by a sunset and closer up, paper lanterns swinging gently from tree branches.

The higher value symbols are quite familiar for this theme and include stylised dragons, Koi and tortoises along with gold ingots and coins; 10, J, Q, K and A make up the lower values.

The basic wild is a jade jewel which appears only on reels one and it will substitute for all others to help form winning combos except for the phoenix scatter symbols. However there’s also the multiplier wild which appears on all reels and will apply a multiplier of 1x, 2x, 3x, 4x or 5x to any win – two wilds in a win are multiplied together.

This is triggered by landing three of the phoenix scatter symbols anywhere on reels two, three and four and you’ll now get to select one of the following free spins options:

The multiplier wilds only appear on reels two, three, four and five and the lowest value one starts on reel two, the next on reel three and so on. See it in action on the video above!

Eastern Emeralds is a very playable addition to the vast ranks of oriental-themed slots and while it’s similar in some respects it’s also different enough to mark it out as one of the better ones; the multiplier wilds certainly add to the mix, there are some big wins in the free spins and an RTP of 96.58%.