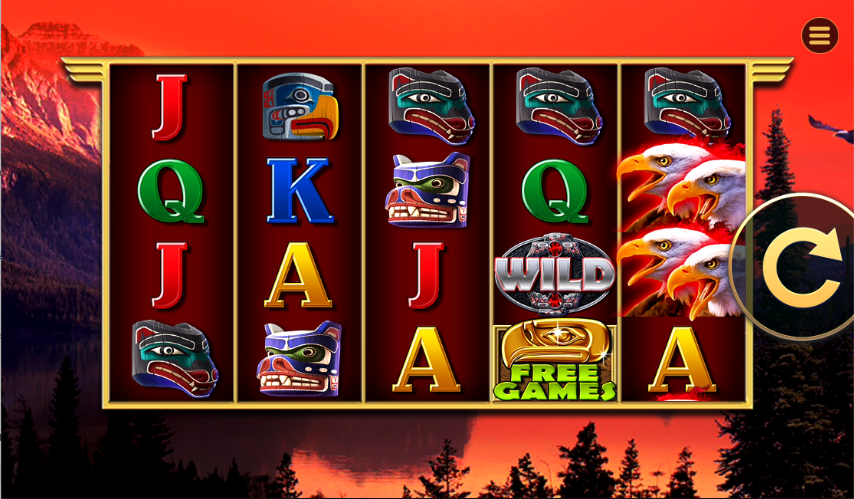 The culture, fauna and mountains of North America set the scene for this online slot machine from High 5 Games; it’s called Eagles’ Flight and it’s those noble creatures which will award free spins and big wins if you decide to take the plunge.

Eagles’ Flight is a five reel slot with four rows and forty fixed paylines; there’s a haunting soundtrack to the action which takes place on set of golden reels floating against a backdrop of trees, mountains and eagles silhouetted in front of a red sky.

The high value symbols here include the eagle and three stylised animal masks of various creatures; J, Q, K and A make up the lower values. The eagle can appear twice per position with a potential prize of 2000x your stake for ten on a payline.

The silver ‘Wild’ is wild and it appears only on reels four and five – it substitutes for all other other symbols except the golden eagle scatter to help form winning combos. One wild is always worth two eagles in one symbol position.

This is triggered by landing three of the golden eagle scatter symbols anywhere on reels two, three and four for which you will receive seven free spins; it’s not possible to win any more spins during this round but as an added extra, on each spin at least one reel may get an upgrade to change any single eagles into double ones.

Eagles’ Flight is certainly recognisable as a High 5 slot so of you like this style of game then you’ll appreciate the sights and sounds on show here; the double eagle payouts add some extra action to proceedings.