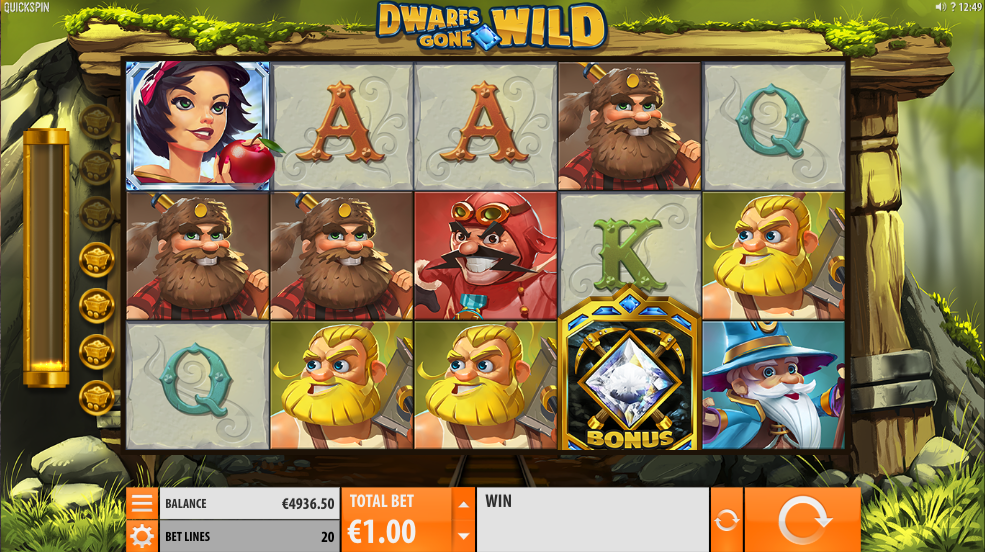 What does it take for a dwarf to go wild? Theft of their gold? Poor quality beer in the local drinking hole? There are probably plenty of ways to rile a dwarf but in this online slot from Quickspin the damage has already been done – Dwarfs Gone Wild tells the tale of what happens after….

Dwarfs Gone Wild is a five reel slot with three rows and twenty fixed paylines; the reels spin within the entrance to a gold mine which, by the look of the mossy roof and unsound structure, looks as if it’s been standing for a while.

Snow White and seven dwarves represent the high value symbols and these include a strongman, one with a red moustache, one with a red flying helmet, one with a hammer, a hunter, a wizard and a posh chap with a top hat; Q, K and A make up the lower values.

The wild is the game’s logo and it will replace all others to help make winning matches except for the diamond bonus symbol and Magic Mirror.

You may have noticed the meter to the left of the reels and when you start the game it will be 75% full; each time a dwarf combo lands on the reels it will fill up a bit and when it reaches the top a minecart to the side will light up. These minecarts represent features in the free spins round.

This is triggered by landing three of the diamond bonus symbols anywhere on reels two, three and four or by filling up all seven minecarts: you’ll now receive seven free spins with the extra features  won from the Golden Minecart Meter:

Dwarfs Gone Wild is great game which extends the Snow White narrative into a new direction; we like the idea of the Golden Minecarts because it means that one way or another, the free spins will be triggered eventually. The cartoon-style animations and graphics are excellent, as is the Disneyfied soundtrack and it comes with an RTP of 96.38%.