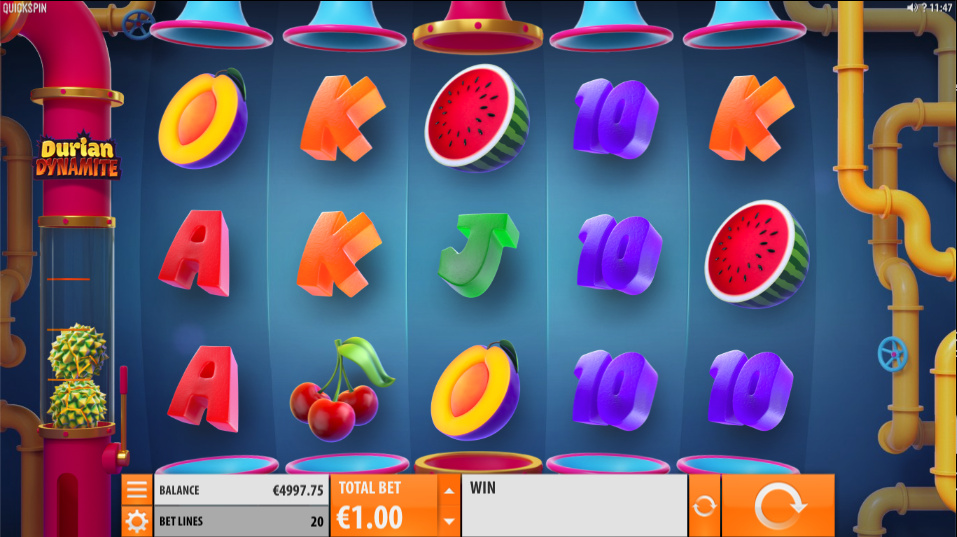 Fresh from the development studios at Quickspin Gaming is this online slot based on one of the planet’s smelliest objects – the durian fruit; it’s called Durian Dynamite and it comes with free spins and the ultimate public transport nightmare – exploding durians.

Durian Dynamite is be a five reel slot with three rows and twenty fixed paylines; in this particular fruit factory pipes surround those reels with the exploding durians contained in the tubes on the left hand side.

The high value symbols are all fruity and include watermelons, oranges, sliced peaches, bunches of grapes and cherries; 10, J, Q, K and A represent the lower values.

The wild is a big ‘W’ which will replace all standard symbols to help form winning combos while the scatter/bonus is a jar of durian jam.

During the base game one of the tubes from which the symbols emerge above the reels is red so look out for durians falling from this one; if this happens the durians in the left hand side tube are launched onto the reels – if a durian hits another durian it will leave one wild in place and create three more which spread around, if these spreading wilds hit a durian they’ll leave one wild in place and create two more spreading ones.

This is triggered by landing three of the jam jars anywhere on reels two, three and four for which you’ll receive a initial free spins but first you must play the Upgrade Picker which will award extra spins (up to a maximum of 30), extra durians in the launcher tube on the left (a maximum of 4) or up to two more red tubes above the reels.

One of the main benefits of this slot is that it doesn’t involve actually smelling any durian but aside from that it’s a lot of fun with some stylish 3D graphics, base game features and a free spins round with some prize potential – check it out!