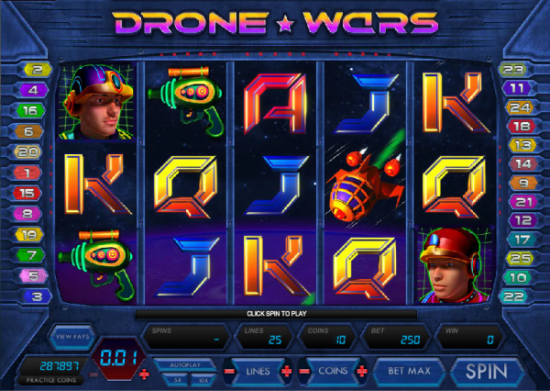 Drone Wars is an online slot from Microgaming which we feel owes more than a little credit to the Star Wars franchise; that being the case it’s of immediate interest to us, being as we are Star Wars nerds.  If the connection is a little tenuous, so what – there are space ships, ray guns and a star-filled horizon so what’s not to like.

Drone Wars features five reels and twenty five paylines and a soundtrack which is certainly reminiscent of more than one galactic movie.  Everything’s very metallic and spaceshipy and all the symbols have a slightly cartoonish edge to them.  There’s a ray gun, a little orange capsule, two pilots, a blue craft and the pink/green drone.

The drone is also the wild symbol and there’s a type of swirling, colourful black hole scatter symbol which triggers the bonus features.

If you can manage to land three or more of the swirly scatter symbols you will activate the bonus game which is called the Drone Wars battle Plan.  You will now get to choose between two different games as explained below:

Space Attack – you will be rewarded with five free spins but they’re all quite valuable; before each spin a number of symbols will appear on the reels before being destroyed by a drone, after which they turn into a wild symbol.  So many wilds on the reels can translate into some pretty big wins.

The good news is that you can win more free spins during this round.

Planetary Assault – this is a game you play yourself which reminds us of some of those original arcade games from the 1980s; your little spaceship is faced with lots of drones and must destroy them by aiming the gun at them – each will be worth a coin amount.

Eventually they’ll start firing back and once you get hit four times, the game is over.  If you can destroy 20 drones before dying, you’ll win a prize of 50x the total bet.

In our experience you’ll win more prizes by choosing the Planetary Assault over the Space Attack but if you prefer free spins, go for that instead.

In the fast-moving world of online slots the graphics aren’t going to win any awards but this is an entertaining slot which zips along quite satisfyingly. It’s not Star Wars but it’s not far off either.