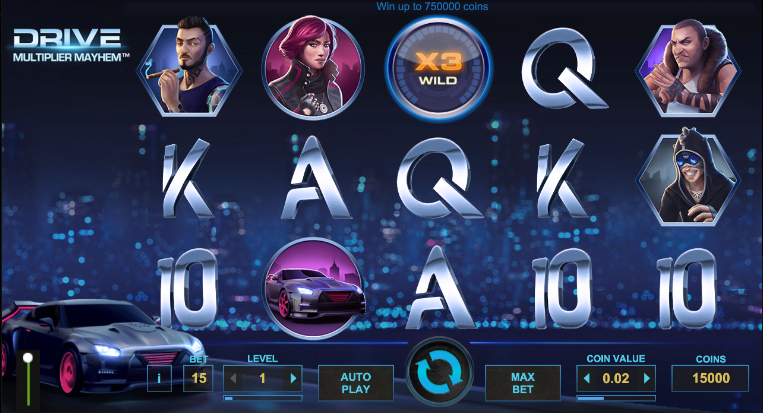 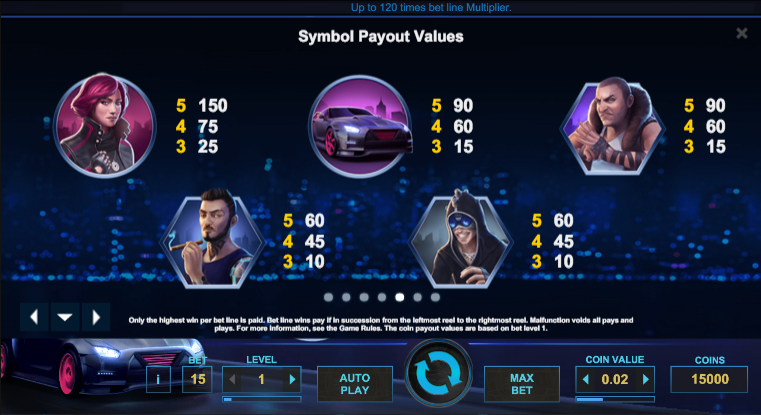 Drive: Multiplayer Mayhem is the brand new online slot from Net Entertainment and it looks as though it’s inspiration may be the Fast & Furious films combined with a hint of Manga’s Neo Tokyo. It’s all neon and gloom but very high quality at the same time and it comes with several clever bonus features that should keep things interesting for many playing hours.

Drive: Multiplayer Mayhem is a five reel slot with three rows and fifteen fixed paylines; the symbols are metallic and they spin on transparent reels against a backdrop of twinkling skyscrapers underneath a starless black sky. There’s a sleek black car loitering with intent to the left of the reels.

There are five high value symbols including the red-haired girl, three dodgy-looking men – Twitch, Hamaki and Bruiser – and the flashy car; 10, J, Q, K and A make up the lower values.

The rev counter is the wild symbol and it’s active in the base game and free spins; it has extra features which are explained below and it substitutes for all other icons except the scatter and the Nitro (only during free spins).

These have the same function in the base game and free spins – wilds landing on reel one have a 1x multiplier, reel two a 2x multiplier and so all the way up to 5x. This is applied to any win the wilds contribute to and if two wilds appear in one combo the values are multiplied together.

The spins are triggered by landing three of the scatter symbols anywhere on reels two, three and four; you will now receive ten free spins on a set of reels which contain the Nitro symbols. Each time you land a Nitro symbol is is collected in the meter on the left hand side and each time you reach a major mark on the meter you’ll gain a level and receive the following rewards:

If a Nitro symbol lands above a standard wild it also acts as a wild.

Drive: Multiplayer Mayhem is typically high quality and enjoyable Net Ent fare with some fast-moving gameplay and interesting bonus features. We triggered the spins fairly easily but perhaps that’s just good luck. Anyway it’s well worth a go and it comes with an RTP of 96.70.