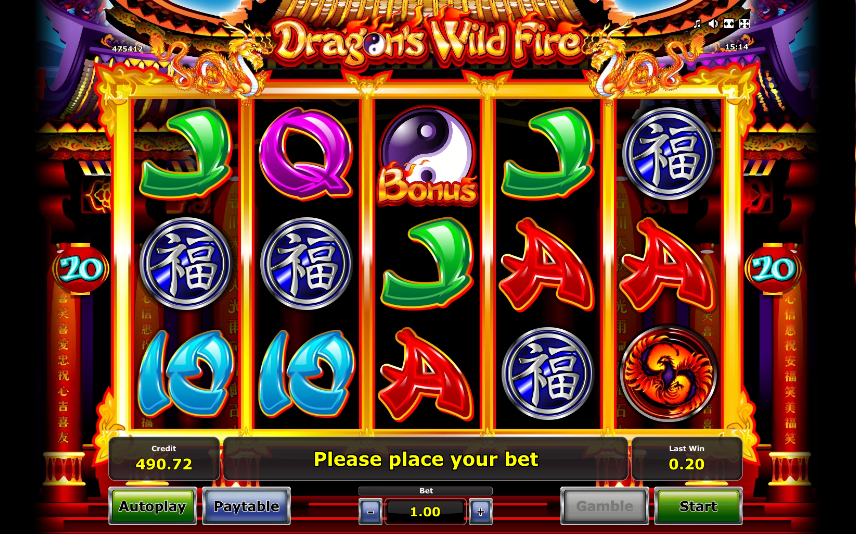 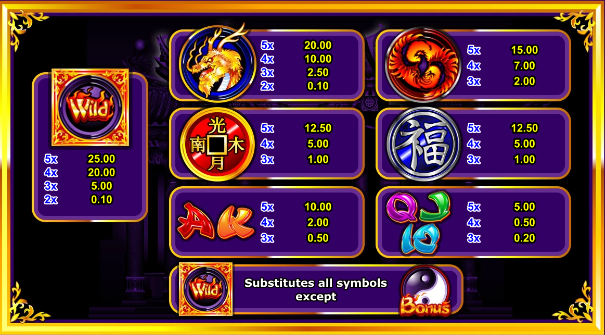 Everybody likes dragons, except perhaps for those people terrorised and frazzled by these huge, made-up creatures in the middle ages so it’s entirely appropriate to have one as the theme of an online slot machine; this game is called Dragon’s Wild Fire, it’s developed by Novomatic and it comes with two separate bonus features.

Dragon’s Wild Fire is a five reel slot with three rows and twenty fixed paylines; all the action takes place on the side of a Chinese temple underneath a clear blue sky but every so often a golden dragon will fly across the screen just to remind you what this game is all about.

There are four higher value symbols which include the golden dragon, a Chinese dollar, a phoenix and a Chinese character; 10, J, Q, K and A make up the lower values.

The wild is a flaming gold ‘Wild’ which will substitute for all others to form winning combos except for the Yin Yang bonus symbol.

This is triggered by landing three of the Yin Yang bonus symbols anywhere on reels one, three and five and for this you will receive seven free spins. Before each spin starts you will be asked to select left, right, up or down and if any wilds land on that spin they will fill in all the positions until the edge of the reels with wilds in that direction.

More spins can be triggered by landing three more Yin Yang symbols during this round.

Trigger this by landing a reel full of dragon symbols; they will be locked into place and you’ll get a free spin during which any more dragons or wild symbols will also be locked in place. This process continues until no more new wilds or dragons land and then any payouts will be evaluated.

Wins can be gambled by clicking the ‘Gamble’ button below the reels and it’s a simple 50/50, red/black punt to try and double your money or lose it all.

Dragon’s Wild Fire is fairly basic i some respects but it has two intriguing bonus features which have both proved quite profitable for us; it has some strangely amusing sound effects and an RTP of 95.00%