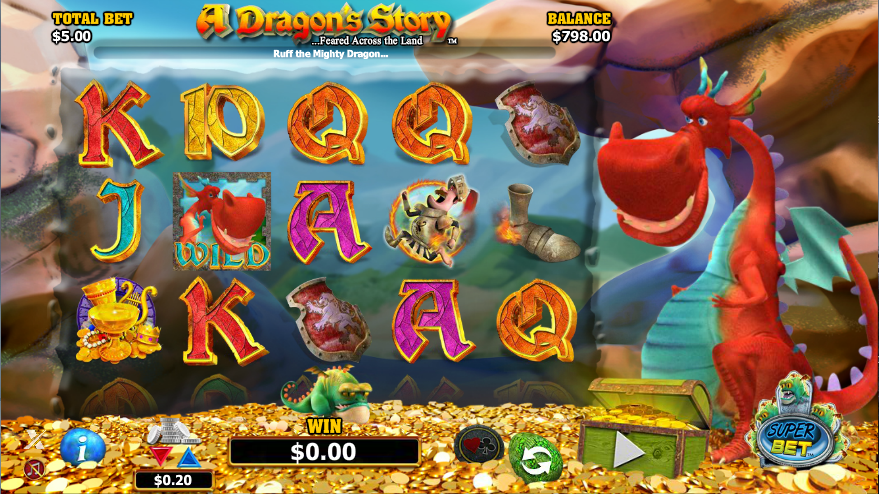 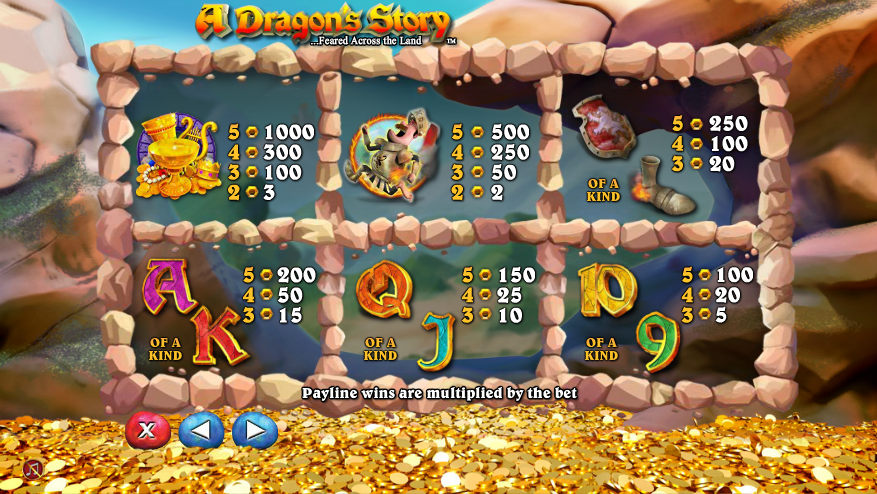 Was there ever a time when dragons were feared across the land? Or is that a result of an overactive imagination prompted by playing online slots such as this quirky effort from Nextgen Gaming. It’s called A Dragon’s Story and it concerns a not-very-fierce creature watching over his stash of gold. It also comes with several bonus features which you can read about below.

A Dragon’s Story is a five reel slot with four rows and twenty five fixed paylines; all the action is set in the dragon’s lair and he watches over the spinning reels and his vast pile of gold from the right hand side.

There are four theme-related symbols including a collection of gold, Sir William, a shield and a burning shoe; 9, 10, J, Q, K and A are the lower values.

The dragon is wild and will replace all others except  the jewel scatter symbol – that activates the main feature.

This is an optional extra bet which will enhance some reels depending on your budget and it increases the chance of the dragon adding some wilds to the reels on each spin:

This is triggered by landing three of more of the jewel scatter symbols anywhere on the reels; you will now receive ten free spins and the value of all wins will be doubled during this round. More spins can be retriggered by landing more scatters and if you’re playing with the SuperBet feature active you will receive even more extra wilds added to those particular reels.

This can be randomly awarded after any spin and all you have to do is pick one of the fireballs on display to reveal a bet multiplier of up to 1250x.

Any win can be gambled by clicking the hearts/clubs button below the reels; try to double or quadruple that sum by guessing correctly the next colour or suit.

A Dragon’s Story is an enjoyable game with some cute graphics and a nice variety of bonus features; we would recommend using the SuperBet option because not only does it make things more exciting, the RTP increases slightly also.