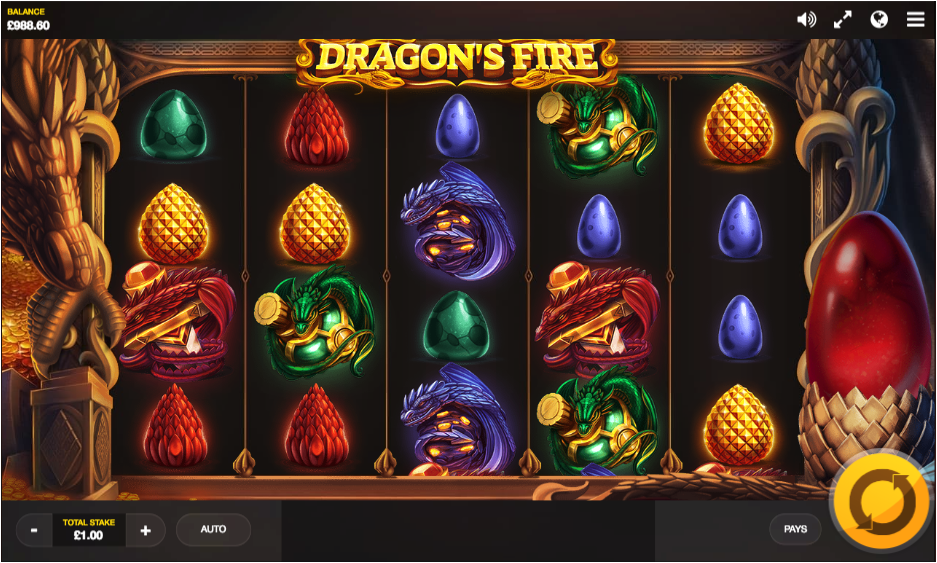 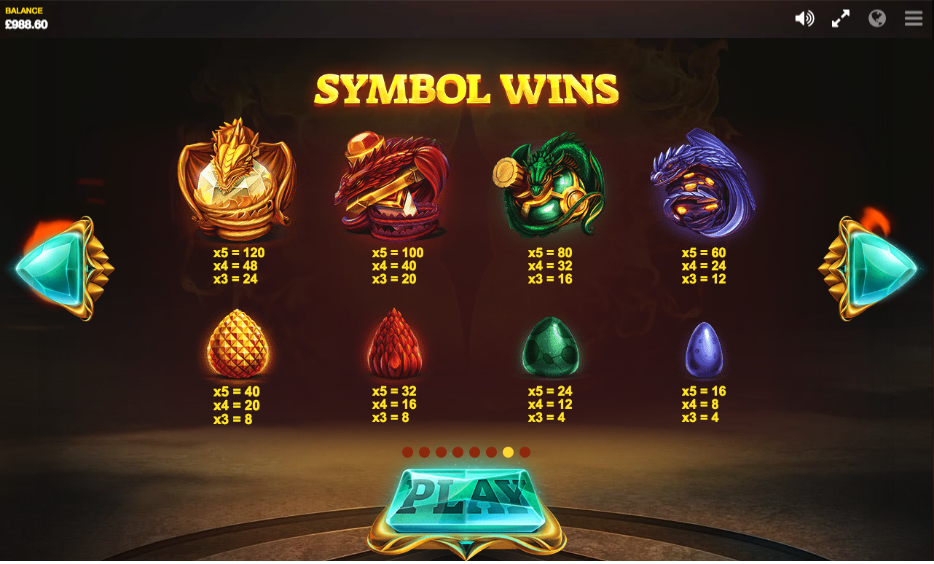 Our fire-breathing friends are a regular staple of online slot machines but of course there’s always room to squeeze in one more and here we have Dragon’s Fire, a release from Red Tiger Gaming complete with some fiery free spins and more base game features.

Dragon’s Fire is a five reel slot with four rows and forty fixed paylines; those reels are an enormous golden structure which a large red dragon’s egg on the right hand side. On the left the golden dragon moves around in a sinister way.

Four dragons of different colours – gold, red, green and purple – and coiled in different positions are the higher value symbols along with the stacked dragon’s eye while four ornate dragon’s eggs of corresponding colours make up the lower values.

The wild is a fiery ‘Wild’ which will replace all others to help form winning combinations except for the Free Spins scatter symbol.

This occurs following every win in the base game and free spins and it it increases the multiplier for the next win by 1x up to a possible (but unlikely) 50x. Subsequent wins keep the increases going but a non-winning spin will reset the multiplier back to 1x.

Trigger this by landing at least three of the Free Spins scatter symbols anywhere in view after which you’ll be asked to pick one of the golden dragons to reveal the number of spins awarded. During this round the Dragon’s Egg Multiplier doesn’t reset on a non-winning spin and in addition any multiplier value it has reached will be carried over back to the base game when you’re done.

This is a randomly-occurring feature which will increase the Dragon’s Egg Multiplier up to a maximum of 10x.

Another random feature which sees the dragon breathe fire onto the reels to leave wild reels or Free Spins symbols behind.

There’s plenty to like about Dragon’s Fire with its classy, glossy graphics, dramatic soundtrack and fast-moving gameplay which clips along at a fair old pace; the features seem to hit regularly and an RTP of 96.10%. Perhaps the only downside is a maximum bet of £10.00 which may make this unsuitable for the highest of rollers.