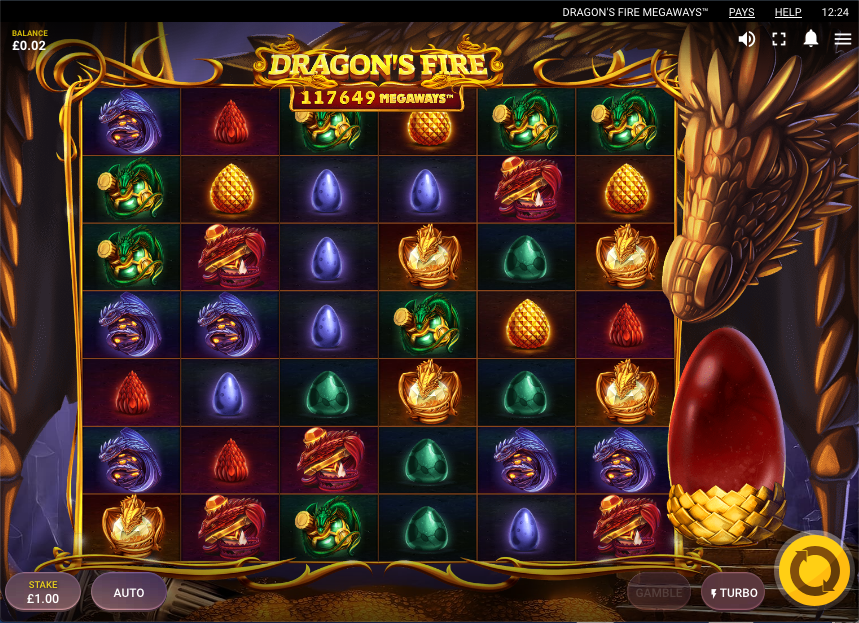 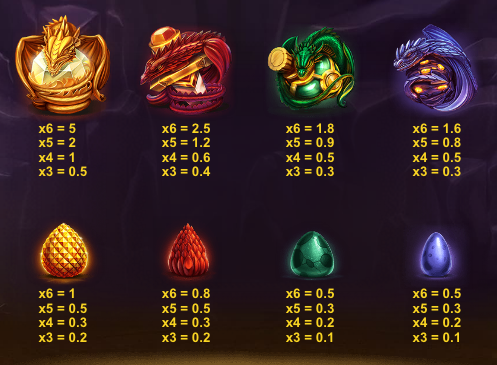 If you’ve previously enjoyed Red Tiger Gaming’s Dragon Fire online slot the you’ll be pleased to hear that it’s now been given the Megaways treatment to offer more than 117,000 paylines over six reels; the bonuses remain the same but this time on a much larger set of reels.

Dragon’s Fire Megaways is a six reel slot with up to seven rows which all adds up to a potential 117,649 paylines for the luckier players; we’re back in the dragon’s cave again with our fiery friend coiled around those golden reels.

The four higher value symbols are dragons in gold, red, green and purple, all wrapped around some valuable object; four gems in similar colours make up the lower values.

The dragon’s eye is wild and is replace all standard symbols to help create winning matches; the icy Free Spins symbol is the scatter.

This occurs following every win in the base game and free spins and it it increases the multiplier for the next win by 1x up to a possible (but unlikely) 50x. Subsequent wins keep the increases going but a non-winning spin will reset the multiplier back to 1x.

Trigger this by landing at least three of the Free Spins scatter symbols anywhere in view after which you’ll be asked to pick one of the golden dragons to reveal the number of spins awarded. During this round the Dragon’s Egg Multiplier doesn’t reset on a non-winning spin and in addition any multiplier value it has reached will be carried over back to the base game when you’re done.

This is a randomly-occurring feature which will increase the Dragon’s Egg Multiplier up to a maximum of 10x.

Another random feature which sees the dragon breathe fire onto the reels to leave wild reels or Free Spins symbols behind.

Dragon’s Fire Megaways is a slot which shows how a different psyline structure can breathe new life (and fire) into what was already a popular game; lots of base game features and multipliers mean this is highly recommended.