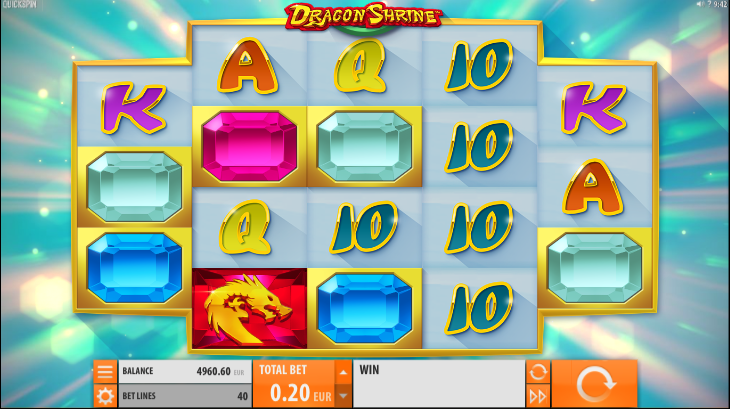 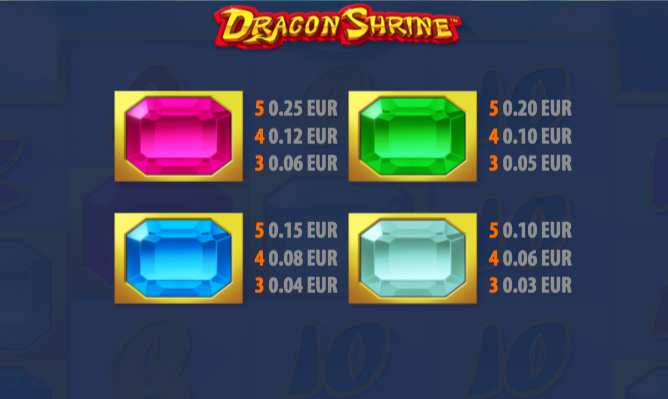 AT first glance this online slot from Quickspin Gaming doesn’t appear to be base on any particular theme but look and listen a bit closer and you’ll see and hear some clues that it is in fact oriental; it’s called Dragon Shrine, it comes with two separate bonus features and it’s all explained in more detail below.

Dragon Shrine is a five reel slot with variable rows and forty fixed paylines; the design is quite basic but of a high quality and the reels spin against a rather psychedelic, constantly shifting blue backdrop. The Chinese music is an appropriate compliment to the theme.

There are four high value symbols in the base game and they are all gems of various colours – pink, green, blue and light blue; 10, J, Q, K and A make up the lower values.

The wild symbol is a blue ‘Wild’ an on gold tablet and it will replace all others in a winning combo except the bonus scatter – that’s a green circular icon displaying a temple and it appears only on reels two, three and four. There’s also a golden dragon bonus symbol which is explained fully below.

This is triggered when a full stack of dragon symbols lands on reel one; all dragon and wild symbols will now be frozen in place for three free respins. Any further dragons and wilds will also lock in place until the spins are over.

Trigger this by landing three of the bonus scatter symbols anywhere on reels two, three and four; you will now be awarded ten free spins with paylines which pay from right to left as well as left to right. Additionally the Dragon Stack Respins can be triggered from reel five as well as reel one and if/when that happens the opposite reels (one or five) will also be full of stacked dragons.

This feature can be retriggered with three more bonus scatter symbols.

Dragon Shrine certainly lives up to the usual high quality set by Quickspin Gaming; it features some lovely smooth gameplay, two interesting (and potentially lucrative) bonus features and it comes with an RTP of 96.55%.