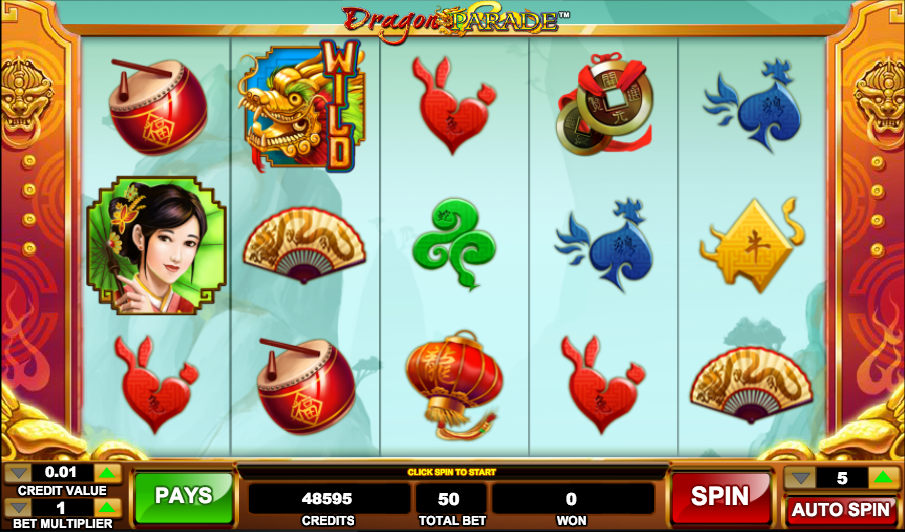 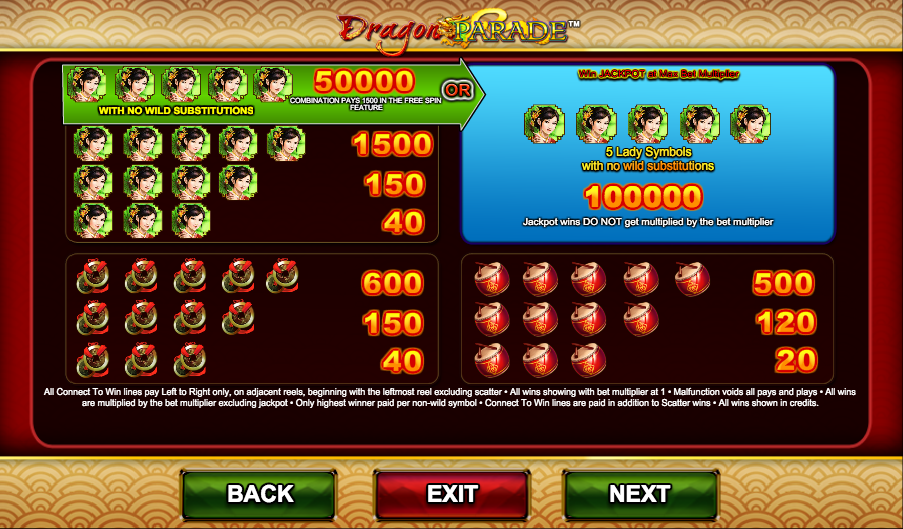 Dragon’s are always an useful addition to any online slot and here they combine with a Chinese theme to give us Dragon Parade, a good-looking game developed by Cadillac Jack (now part of Amaya Gaming). There’s a free spins game, a massive 100000x jackpot and the ‘Connect To Win’ feature which we shall explain below.

Dragon Parade is a five reel slot with three rows and the Chinese theme is clear from the design with lots of gold, red and dragon motifs adorning the scene. Look closely at the background and you’ll see a rocky landscape through the blue haze.

The symbols are all related to the theme and include the lady, the Chinese dollar, a drum, a lantern, an envelope of cash, a fan plus clubs, diamonds, hearts and spades in an oriental design. Landing five of the lady symbols with no wilds wins 50000x your line stake or 100000x with the maximum bet.

The wild symbol is the dragon mask and it substitutes for all others except the scatter – that appears on reels one, three and five and is represented by a some firecrackers.

This occurs in several Cadillac Jack slots and it’s described as a way to make paylines easier to visualise using “natural payline algorithms”. Essentially this means that rather than sticking to pre-determined paylines, you’ll form a winning combo as long as the matching symbols are next to each other (horizontally or diagonally). Longer wins will also be illustrated by the dragon moving across the screen.

This is triggered by landing three of the firecracker scatter symbols anywhere on reels one, three and five and you will initially receive seven free spins although more can be re-triggered with more scatters.

During this round winning combos can start from reels one, two or three so it can be fairly lucrative.

“Connect To Win” adds a bit of interest to an already enjoyable game which is pretty high quality. It’s ranks well against many Chinese-themed slots and it’a worth a pop although the RTP is a bit low at 91.79%.