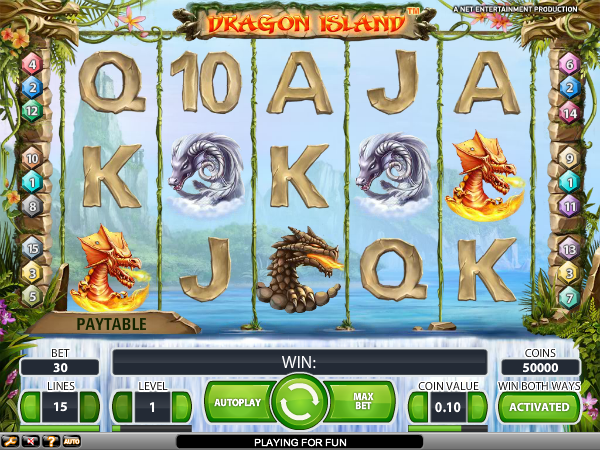 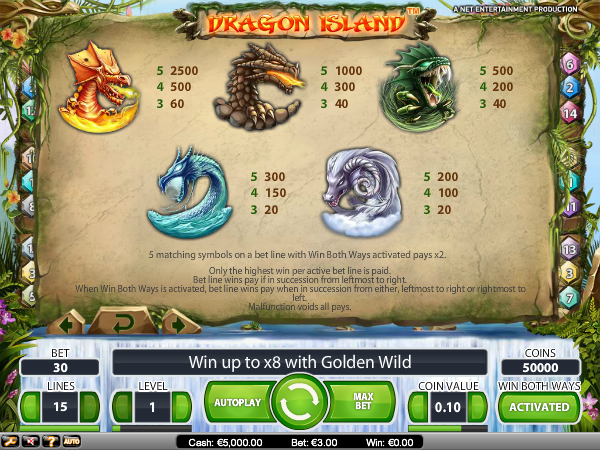 Sometimes a bit of escapism is just what’s needed and an online slot such as Dragon Island exists totally in a fantasy world; games such as this take elements from different legends and myths throughout the ages and the challenge is to weave them all together in a compelling game.

Dragon Island looks great, as most Net Entertainment slots do and behind the reels we can see a steamy, mountainous landscape; the reels themselves are set in vines hung between two dragon heads and underneath the reels water cascades over a precipice.  There are five reels and up to fifteen paylines.

10, J, Q, K and A are the basic symbols but the five more valuable ones are a selection of beautifully drawn dragons so we have a white cloud dragon, a blue water dragon, a green dragon, a brown dragon and an orange fiery dragon.

This pretty much does what it says on the tin and if you click the activation button at the bottom right of the reels it’s possible to win by making winning combos from left to right and right to left.  It will however double your wager amount.

Activating this feature also means the Golden Wild can appear on the reels.

When the Golden Wild is activated the symbol is added to the reels and if you’re lucky enough to land it in a winning combo it will multiply that win amount by between 2x and 8x.

Landing three, four of five of the volcano scatter symbols will grant you 10, 20 or an impressive 50 free spins.  During this phase an expanding wild will appear on a random reel before each spin, covering all places.

More free spins can be won by landing more scatter symbols during the bonus game.

Net Entertainment graphics are always top notch and Dragon Island maintains that excellent standard; the free spins bonus game is most welcome and complemented by the Win Both Ways and Golden Wild features.