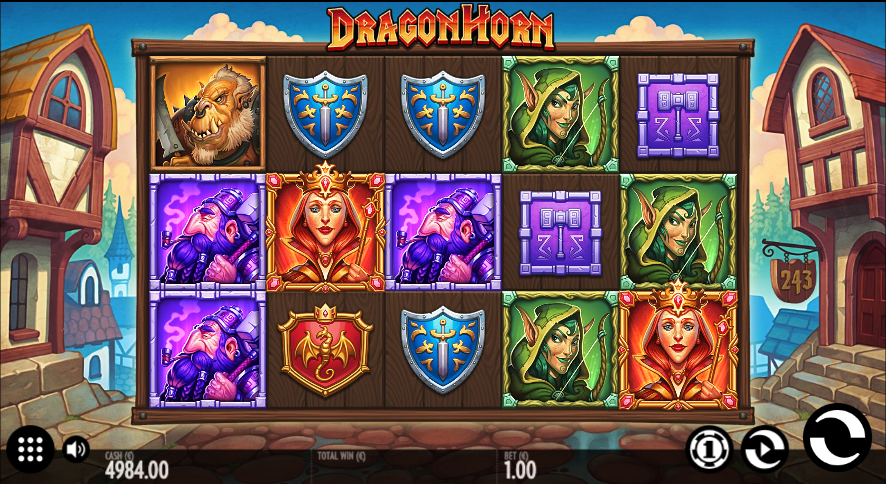 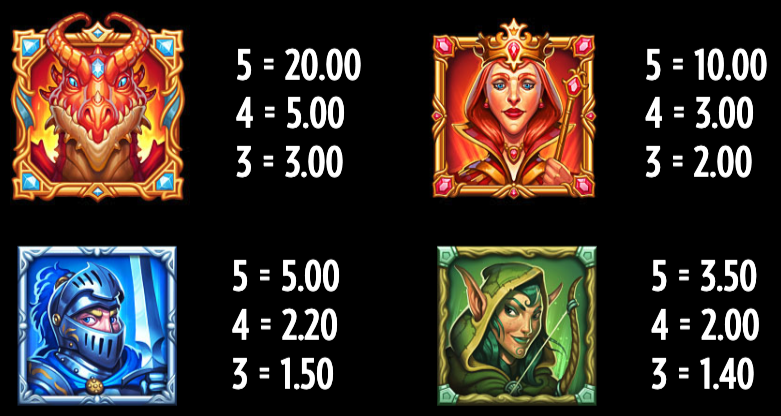 We don’t really know when dragons died out but given the mostly mediaeval surroundings in online slots such as Dragon Horn they were definitely still around in the middle ages; this release from Thunderkick offers players a colourful game with an interesting free spins round.

Dragon Horn is a five reel slot with three rows and 243 ways to win; we’ve already mentioned the mediaeval setting to this story and that landscape forms the backdrop to the wood-framed reels which spin accompanied by a dramatic soundtrack.

The six higher value symbols are all characters from this story and they include the dragon, the knight, the queen, the elf, the dwarf and the ogre; five shields of varying colours represent the lower values.

The big, blue ‘W’ is wild and will substitute for all standard symbols to help make winning matches; the Dragon Horn is the scatter symbol.

On each spin the Dragon Fire symbol may appears which will then transform into one of the other standard symbols with the chance of helping out with a win – this becomes more significant in the free spins.

This is triggered by landing three, four or five of the Dragon Horn scatter symbols anywhere in view for which you will receive seven, nine or eleven free spins respectively; your task during this round is to collect more Dragon Horns, each of which will fill up one of the three spaces in the top left and award one more spin.

To start the spins one particular shield will turn into a Dragon Fire symbol (and then transform) but each time the three Dragon Horn spaces fill up one more shield will join the Dragon Fire fun. Watch our gameplay video above and this should all make sense.

Dragon Horn is a slot which benefits from a clever feature in the base game along with a really creative free spins round to keep us entertained; we generally say that anything with a dragon involved can’t be bad and that’s certainly true of this game.