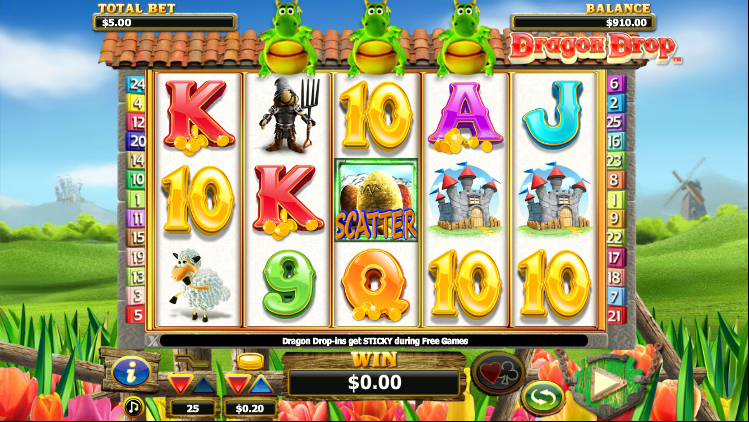 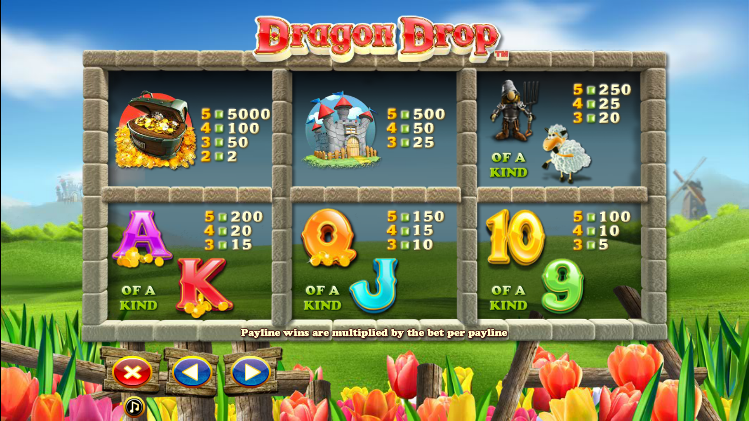 Was there ever a time when dragons soared around the blue skies, scorching bits of countryside as they went? Obviously not, but we can suspend belief occasionally especially when those dragons are as friendly as the ones featured in Dragon Drop, a colourful online slot from NextGen Gaming in which chubby dragons drop from above to help out as wild symbols – read more below.

Dragon Drop is a five reel slot with three rows and up to twenty five paylines; it’s set in a sunny fantasy environment with green fields and windmills under blue skies. The reels spin a signpost.

The four high value symbols are a treasure chest, a red-turreted castle, a chap with a pitchfork and a worried-looking sheep; 9, 10, J, Q, K and A make up the lower values.

The dragon is the wild symbols and he only appears on reels two, three and four, doubling any win to which he contributes; the scatter symbol is the dragon’s egg which activates the main feature.

During normal gameplay you will notice the three dragons perched above the three centre reels; there is a chance that one or more may drop onto the reels to create a wild position and reward you with a bonus win.

This feature is triggered by landing three or more of the dragon’s egg scatter symbols anywhere in view. You will now receive eight free spins during which all wins are doubled.

Additionally any wild symbols which appear on the reels will freeze and be held in place for the rest of the spins. You can’t trigger more spins from within this round.

Any win can be gambled by clicking the ‘hearts/clubs’ button below the reels and you now have the chance to double or quadruple that win by guessing the correct card colour or suit.

Dragon Drop is a cheerful and colourful slot with a free spins feature that seems to triggered regularly; the sound effects are also endearing and there’s a reasonable RTP of 95.23%.