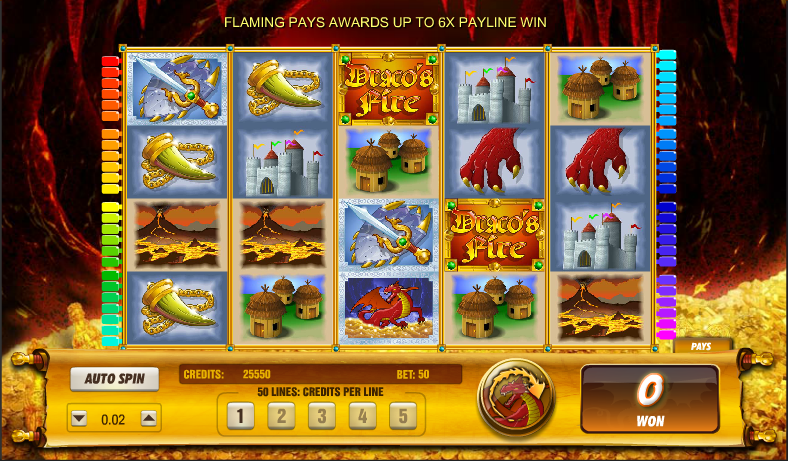 Dragons, swords and medieval castles must mean we are in the realms of fantasy  as we check out Draco’s Fire, a fiery online slot from Amaya Gaming. Very few things are not improved by the appearance of dragons and we’re always happy to see one in a slot machine. Draco’s Fire is an interesting-looking game with several bonus features to keep players entertained.

Draco’s Fire plays out over five reels and fifty fixed paylines but it also has four rows of symbols which is a little unusual. It’s all set against the backdrop of a cave full of gold, presumably the lair of our dragon and all the symbols are theme-related.

Those symbols include some village huts, a volcano, the castle, a ceremonial horn, a dragon’s talon, a sword and the game’s logo.

Bonus symbols are the dragon’s head (of which more below), the red dragon wild and the scatter symbol which is represented by the dragon prancing around on a pile of gold.

The Dragon’s Head can be stacked and has two functions as follows:

If the wild symbol lands on an active payline on reels two and four, the dragon will appear at the top of the screen and breathe fire onto the reels, setting several symbols ablaze. This will lead to payline wins of up to 6x.

The scatter symbol of the dragon on gold is the key to this feature and you need to land it on reels one, three and five to grab those spins. You will receive twenty free spins which can be re-triggered during the feature.

Although this might look a little graphically basic, it’s good fun and there’s always something happening in terms of bonus features. The music is also pretty dramatic for those who put much store in that kind of thing.