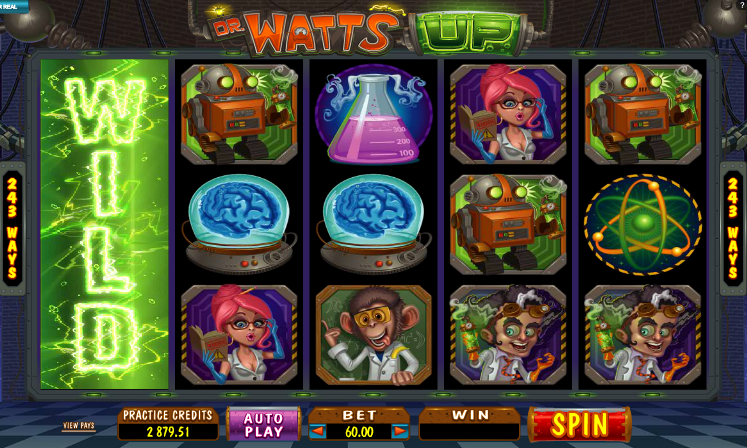 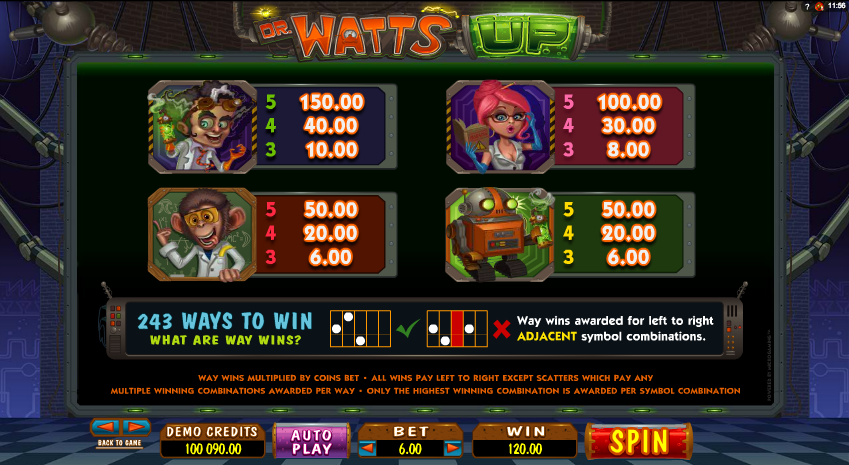 Strange potions, mad scientists and a monkey in a lab coat – if you’re seeing these items on your reels then you’re playing Dr. Watts Up by Microgaming.  It’s a colourful and entertaining slot with a ghoulish soundtrack and several bonus features to keep you interested.

This slot is a five reel and 243 payline game which is based on the insane experimentation of Dr. Watt and the characters he works with.  It’s set against a mad scientist-like backdrop and their are some great animated symbols.

From the least valuable upwards we have a beaker of purple liquid, a floating brain, a green creature underneath a microscope, a ray gun, a robot, a monkey in a lab coat, a sexy red-headed assistant and Dr. Watts himself.  There’s also a valuable atom symbol, a Dr. Watts Up logo (which is the wild) and a rat in a jar which is the bonus symbol.

Spinning the rat in a jar on reels one, three and five will reward you with this bonus game and you’ll be taken to a screen displaying a number of test tubes; pick two and Dr. Watts will calculate their worth in coins – you have two more picks if you want to try for a bigger prize.

Landing the atom symbol three, four or five times anywhere on the reels will trigger the free spins reward and you can win 10, 15 or 20 spins respectively.  Your wins will be multiplied by the total amount staked but unfortunately this bonus game can’t be re-triggered by  landing more atoms.  During the free spins a zapper will randomly pick a reel to turn wild for the next spin.

Rather than the standard paylines available on most slots, this feature means that your symbols can win even if they just on adjacent reels; you’ll still need three of them or a wild but it’s a nice feature.

Dr. Watts Up certainly keeps up with some of the best slots releases of recent times; the animations are great, as is the soundtrack and the bonus games offer some decent variety.