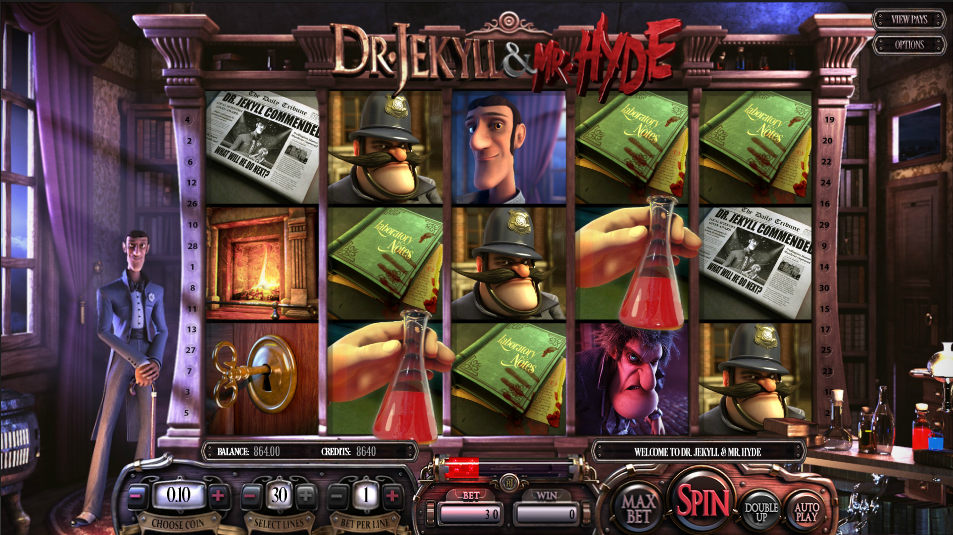 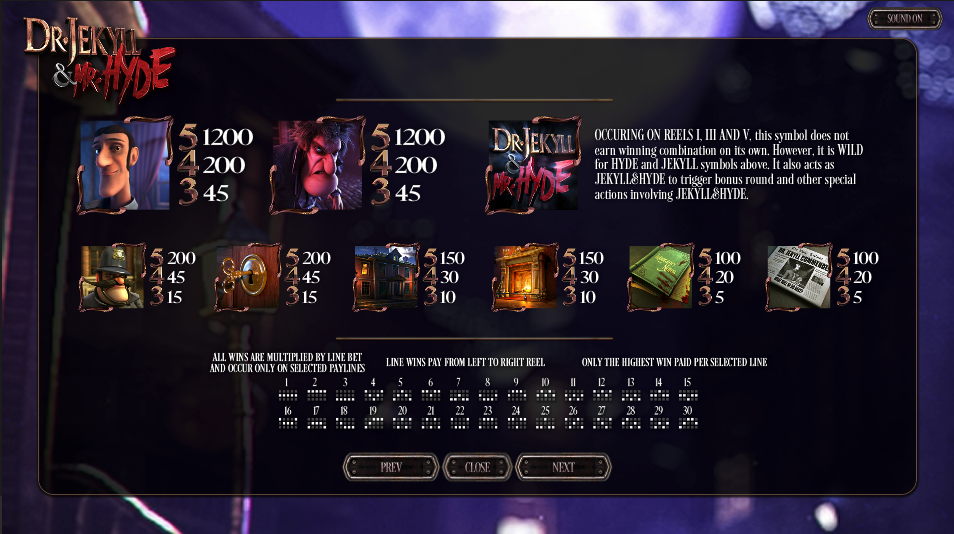 The Strange Case Of Dr. Jekyll and Mr. Hyde is a Robert Louis Stevenson novel published in 1886 and it concerns a potion which turns the mild-mannered Jekyll into the wild Hyde. It’s also the theme of two online slots we’ve reviewed, one from Microgaming and this one from Betsoft; it’s called Dr. Jekyll & Mr. Hyde and it includes a number of bonus extras including a guaranteed free spins round.

Dr. Jekyll & Mr. Hyde is a five reel slot with three rows and up to thirty paylines; all the action takes place in Jekyll’s laboratory and he wanders round the reels inspecting potions while the gameplay is underway.

There’s a well-designed range of symbol including Dr. Jekyll, Mr. Hyde, a policeman, a key in a lock, Jekyll’s house,  fireplace, a green book and a newspaper.

The wild symbol is the game’s logo but it only substitutes for the Jekyll and Hyde icons. The red and blue potions don’t payout on their own but combine with other symbols.

If you can land red potions on reels two and four either side of Dr. Jekyll then all Jekylls, Hydes and wilds become Wild Hydes. The symbols on the reels will rearrange themselves and award wins.

If you can land blue potions on reels two and four either side of Mr. Hyde you will receive a random multiplier of up to 20x your total bet.

This is triggered by landing Mr. Hyde on reels two and four either side of the wild symbol; you must now guide the monster left or right through the streets of London, stealing things and avoiding policemen. A 66x multiplier of your total bet is the maximum prize here and the round is over when you encounter a wide-awake copper.

Trigger this by landing Dr. Jekyll on reels two and four either side of the wild symbol and you must now pick potions to create an anti-monster serum as quickly as possible. The faster you do it, the bigger the prize and the maximum win is 160x your total bet.

Beneath the reels is a meter which is gradually filled up by collecting red potions on reels two, three and four. Once you have 100 the meter will be full and the free spins round will begin. You’ll see a short movie with Jekyll changing into Hyde and then the spins will begin on a new set of reels.

The free spins will now continue until you have collected twelve blue potions in the meter below the reels. Hyde drinks the blue potion to return to normal and the round is over.

This slot looks absolutely fantastic and it features a number of inventive bonus features which tie in well to the theme. We like the guaranteed free spins (as long as you play long enough) and the sound effects are well thought out.