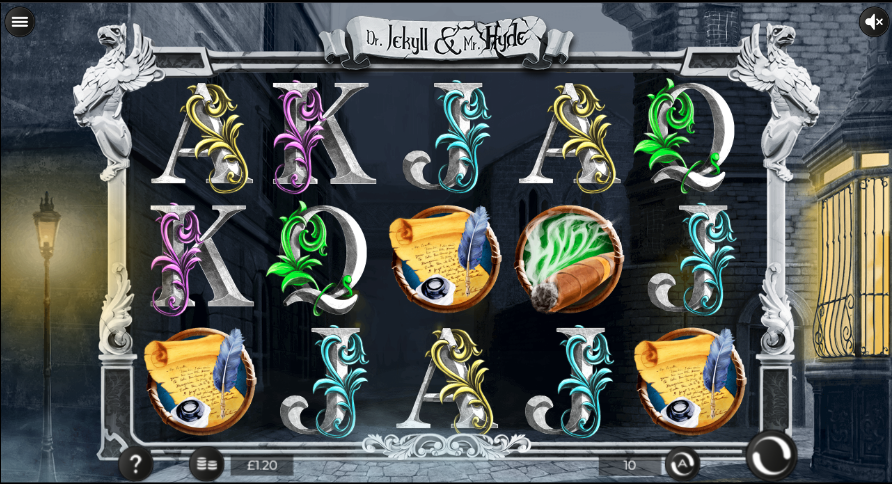 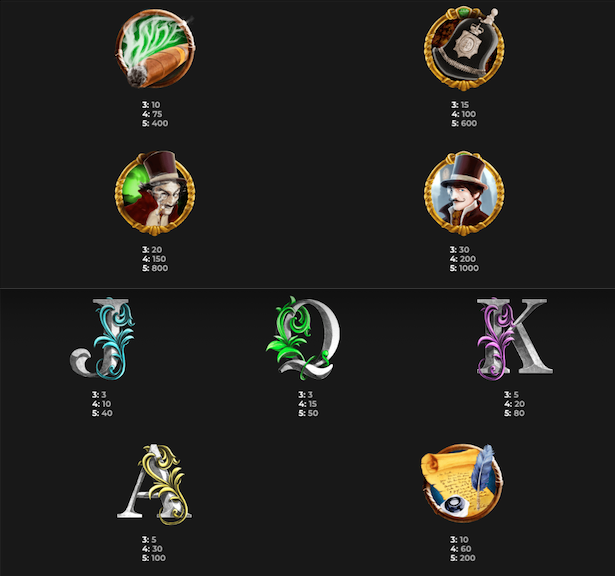 Based on the Strange Case of Dr. Jekyll and Mr. Hyde by Robert Louis Stevenson, this online slot from 1×2 Gaming adds some colour to that tale and also offers players expanding wild symbols and an enhanced free spins round for your Victorian pleasure.

Dr. Jekyll & Mr. Hyde is a five reel slot with three rows and thirty fixed paylines; the foggy streets of Victorian London form the backdrop to those reels which spin within ornate, marble columns.

The symbols related to the theme include Dr. Jekyll, Mr. Hyde, a policeman’s hat, a smouldering cigar and a quill pen/scroll; J, Q, K and A represent the lower values. The collection of potions is the wild symbol which only appears on the top row but will expand downwards to cover all positions on that reel, changing into Mr. Hyde when it does – it will replace all standard symbols to help form winning matches. The Hyde green potion is the scatter symbol.

Landing three, four or five of the Hyde potion scatter symbols anywhere in view will award 20, 30 or an impressive 50 free spins respectively; there are two different spin modes:

Police Badge – if a Police Badge appears on reels two, three or four it will transform into a wild which will double in size for the next two spins before disappearing. More than one Police Badge can appear on each spin.

Dr. Jekyll’s Potion – a potion symbol can appear at the top of reels two, three and four and when it does it will expand downwards and then move one reel to the left until it reaches reel one and drops off the end. More than one wild can appear on each spin.

We always enjoy a slot based on a classic work of literature and Dr. Jekyll & Mr. Hyde is an enjoyable addition to this growing genre; the wild features add a bit of zip to the the base game and the free spins and there are some big wins in the latter for the luckier players.