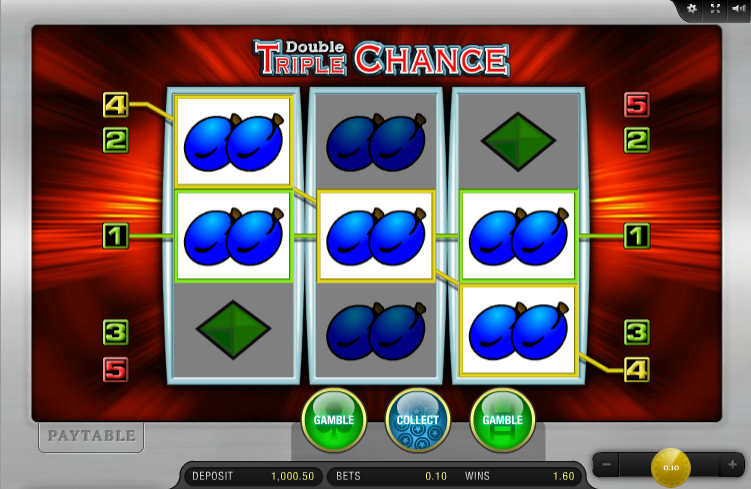 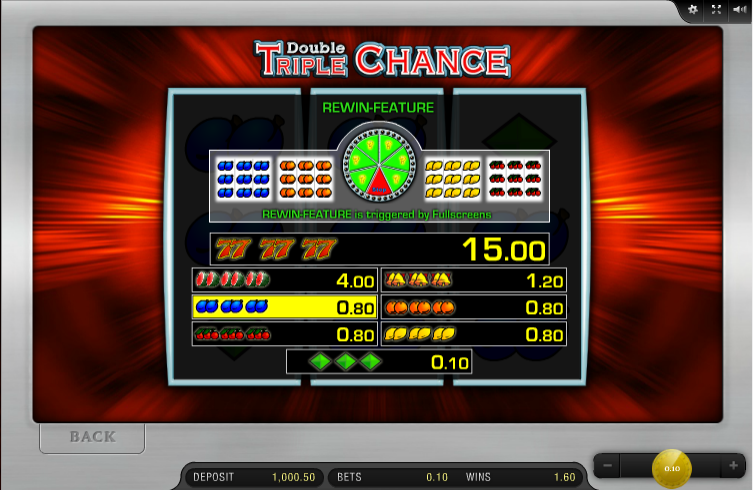 We’ve been playing a few games developed by Merkur Gaming recently and there’s a certain ‘Marmite’ factor about them in that we can’t really decide if we like them or not. We do keep coming back to them however so that’s got to be a good sign and there’s definitely an addictive quality to these games which belies their simplicity. This one’s called Double Triple Chance and you can read all about it below.

Double Triple Chance is a three reel slot with three rows and five fixed paylines; it’s a basic-looking game  and the bright reels are set against a backdrop featuring dramatic red brushstrokes.

The symbols are all of a traditional nature and include red sevens, watermelons, plums, cherries, bells, oranges, lemons and a green diamond. All the symbol are stacked which not only offers more winning opportunities but is also necessary for the Rewin feature. There are no wild or scatter symbols.

This is triggered by landing matching symbols on all reels and initially you’ll receive a hefty payout but then the feature will begin. You will get to play a ‘Wheel Of Fortune’ game in which you need to land on one of the green segments which will respin another full set of matching symbols.

This process can be repeated up to six times or until you land on the red segment which ends the feature.

Double Triple Chance has some addictive and attractive gameplay and we would in fact like to recommend it; it adds a little extra to a standard three reeler and it comes with an RTP of 95.65%.