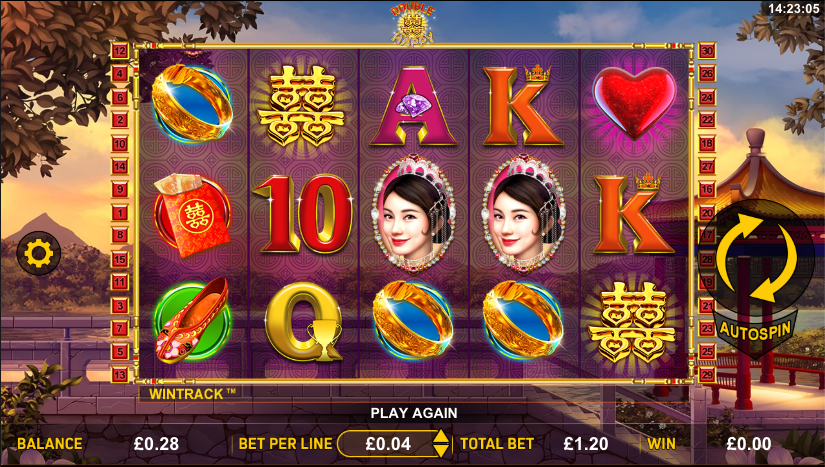 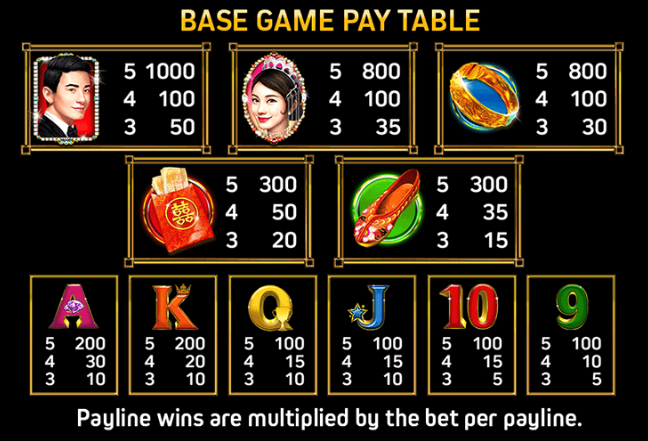 An online slot machine dedicated to the fine institution of marriage is a rarely-seen thing but here we have one combined with a Chinese theme; it’s called Double Happy, it’s developed by Aspect Gaming and can reward player with double symbols to celebrate.

Double Happy is a five reel slot with three rows and thirty fixed paylines; there’s a delicate, golden rim surrounding those reels which float in front of a background containing a lake, a mountain and perhaps the wedding venue.

The high value symbols include the lucky couple, a gold ring, an envelope of cash and a red show; 9, 10, J, Q, K and A represent the lower values.

The wild is a golden brooch which appears only on reels two to five and substitutes for all others to help form winning combos except for the heart scatter symbol.

The heart scatter symbol appears only on reels one, three and five but if you can land three anywhere on those reels then the free spins will be yours. There’s ten awarded initially but landing the scatter symbols for a second time will award an extra five. Landing that scatter combo any further times will award no spins but you’ll benefit from the normal scatter payout of 5x the total stake.

The extra bit of good news during this round is that the five high value symbols can all appear as doubles which means it’s possible to form a ten symbol winning combo for a potential win of up to 1500x your stake.

Double Happy is a pleasant enough diversion but there’s not a great deal to keep you hanging around for too long (hopefully unlike a marriage); it’s quite romantic though and comes with an RTP of 94.01%.