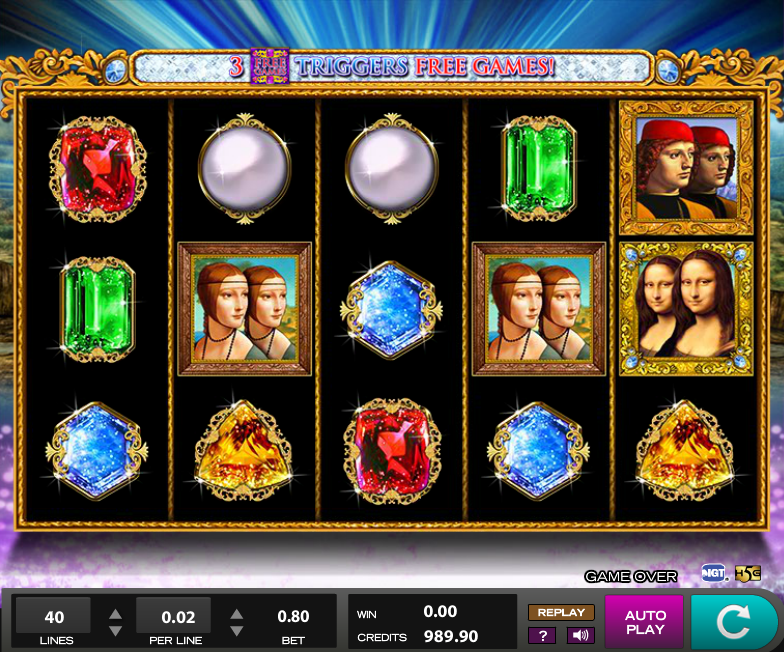 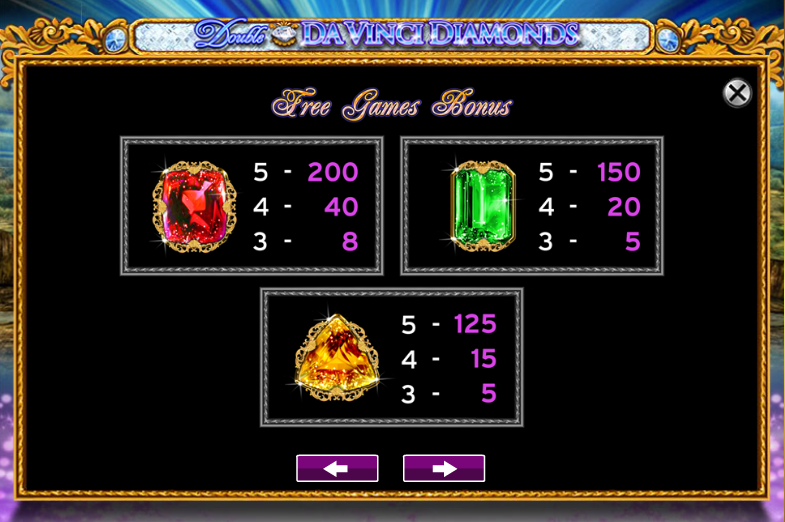 If you’ve previously played an online slot called Da Vinci Diamonds then you’ll already know what to expect from this poshed-up sequel from IGT. It once again focuses on the art of Leonardo da Vinci and while it retains the same features as the original, it adds one more to spice things up a little – you can read all about Double Da Vinci Diamonds below.

Double Da Vinci Diamonds is a five reel slot with three rows and up to forty paylines; the design is similar to it’s predecessor and the reels spin on an ornate gold frame against a dramatic background.

The standard symbols are a range of sparkling gems – red, green, yellow, white and blue – and we once again have the three portraits – Mona Lisa, Cecilia Gallerani and ‘Portrait of a Young Man’ but these are also bonus symbols and are described in more detail below.

The Da Vinci Diamonds logo is wild and substitutes for all others except the Free Games scatter symbol.

The three portrait symbols each appear only on two reels but some of them include two characters in the painting; this is a double symbol and it acts as two symbols when calculating the payout. Winning combos of up to 10 symbols can be formed and the wild will always act as a double symbol.

The Free Games scatter appears only on reels one, two and three and landing three there will reward you with between 6 and 16 free spins; you can’t trigger any more during this round.

We always like this feature – every time you land a win in the base game or free spins, those symbols involved will disappear to be replaced by more falling in from above. More wins can be made in this manner and the process continues until there are no more winning combos.

Double Da Vinci Diamonds may not be a huge advance on the original but the double symbols mix things up a bit and if you liked the original you’ll appreciate this upgrade. The RTP is 94.90%.