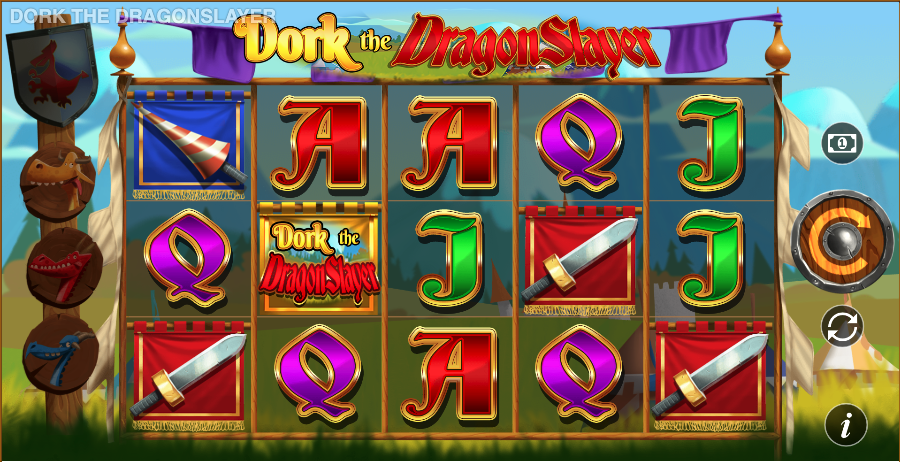 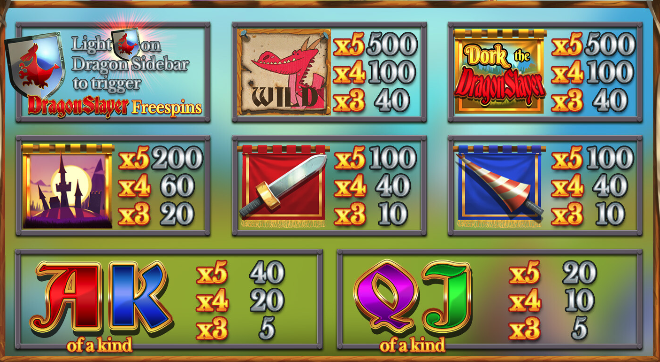 Dragons always add something extra to an online slot machine and in Dork the Dragon Slayer there are various flying lizards to enjoy; this release from Blueprint Gaming tempts players with several themed, base game bonuses as well as the DragonSlayer free spins.

Dork the Dragon Slayer is a five reel slot with three rows and twenty fixed paylines; those reels spin underneath the purple flags of some medieval army while snow-capped mountains form the scenic backdrop.

High value symbols include the Dork logo, the spires of a castle, the sword and the lance; J, Q, K and A make up the lower values. The red dragon is wild and it will replace all standard symbols to help form winning combos.

Any symbols involved in a winning combo will disappear and be replaced by more falling in from above – more wins can then be formed to continue the cascading process.

These are various features which can be triggered at random after any spin:

Landing various special symbols will have the following effect:

If Dork loses all his health the round is over but each time he defeats a dragon the win multiplier is increased; if he defeats all the dragons he will then receive up to nine Hero Spins as a reward.

There’s very little to dislike about a slot which features free spins, cascading symbols and dragons – join the unfortunately-named Dork as he tries to battle numerous enemies and win you cash in the process.