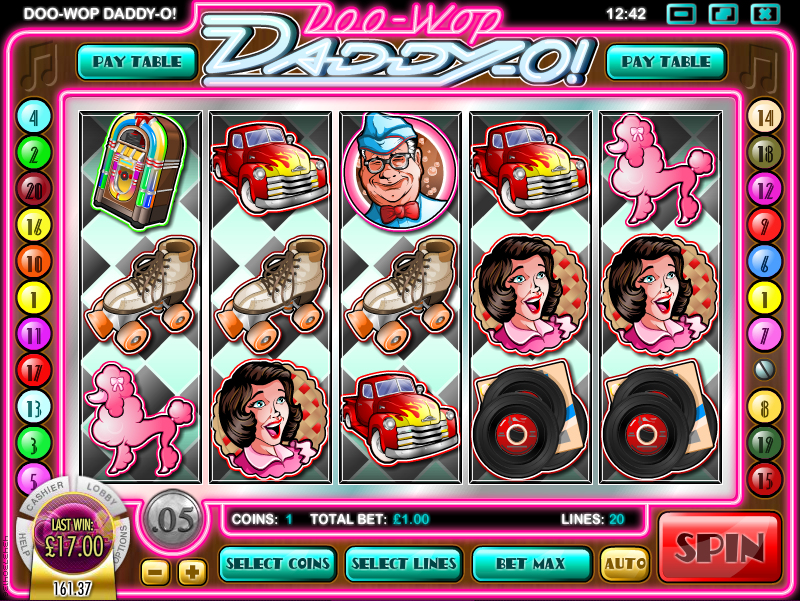 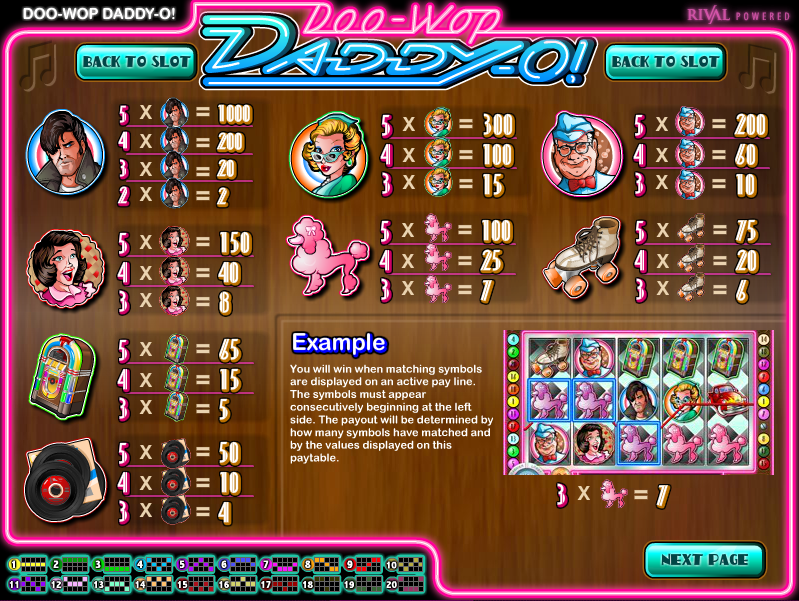 Sometimes the title of an online slot machine pretty much explains what the theme is and when you’re playing something called Doo-Wop Daddy-O you probably know what you’re getting. This is a release from Rival Gaming which celebrates the music and culture of 1950s America and it’s got an appropriate soundtrack to match.

Doo-Wop Daddy-O plays out over five reels and twenty paylines and those reels are set inside a glowing pink neon frame reminiscent of a contemporary jukebox. Aside from the rock and roll music, the sounds of a busy diner will keep you company while you’re playing.

The symbol all relate to the theme and include a roller skate, some vinyl records, a jukebox, a pink poodle and four diner customers – two girls, the waiter and a quiff-haired rocker. The motorbike is the most valuable base game symbol.

Bonus symbols include the diner’s sign which is wild and two scatters – the milkshake and the hot rod – which activate their own features.

Three or more of the hot rod scatter symbols anywhere on the reels will kick this mini-game off and it’s a good one. You will take part in a drag race with another car and when the race is underway you must change gear and honk the horn when prompted to give you the best chance of winning.

Your prize will be dependent on how you fare in the race and you can see it unfold in the video above.

Land three or more of the milkshake scatter symbols anywhere on the reels will trigger this game and it also involves some player interactivity. A customer will show you an ice-cream order and you must pick from the ingredients on show to make it. Get it right and the bigger prizes will be yours.

Practice makes perfect with the bonus games, especially the drag race, so keep at it for the big bucks. In particular you need to change gears down as well as up during the race for some reason so watch out for that.

The two interactive games make this a winner and the background music just adds to the fun. The only downside is the slight difficulty of actually triggering those bonuses but you’ll get there eventually.