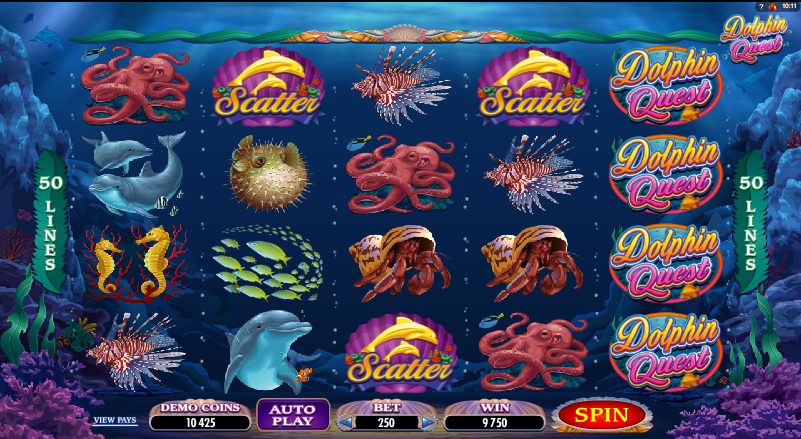 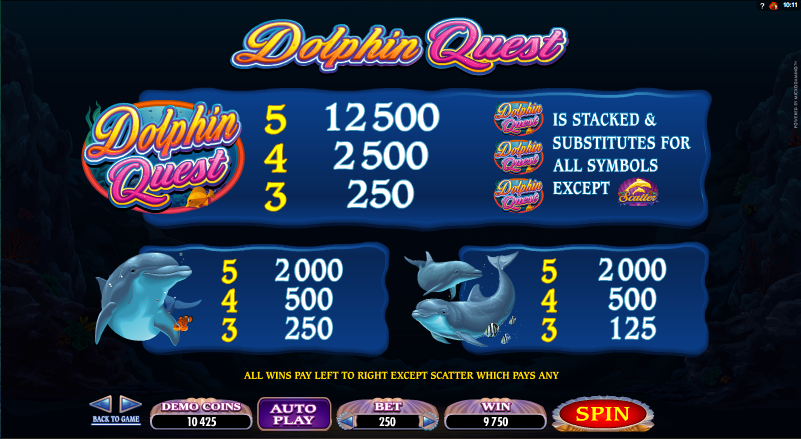 Let’s take a trip deep between the ocean waves to search out some fishy friends in this watery online slot from Microgaming. It’s called Dolphin’s Quest and it joins a reasonably crowded genre of undersea games. We think it’s one of the better ones though so read on find out how to play this nautical release.

Dolphin’s Quest has five reels and fifty paylines and it’s all set deep underwater as you might expect. Rocks and undersea fauna frame the reels while faint daylight shines in from the surface. The background music is quite appealing – it’s a type of steel band sound and there’s no need to reach for the mute button.

The symbols are mostly fish of one kind or another and include seahorses, puffa fish, Japanese fighting fish, octopi, flatfish, turtles and of course dolphins.

The Dolphin’s Quest logo is wild and substitutes for everything except the scatter symbol; it can also appear stacked on the reels, making winning combos a bit more likely. That scatter is represented by jumping golden dolphins and is the key to activating the main feature. The scatter also acts a wild.

The dolphin scatter symbol only appears on reels two, three and four and if you can land them there on the same spin you will trigger this brief feature.

As you can see from the video above a new set of three reels will be displayed with each position containing a prize amount. All you have to do is press the ‘Stop’ button below the reels and you will win the amounts which are displayed on the win line when everything stops moving.

That’s all there is to it but in our experience it results in quite big wins.

We’d like to see something a bit more creative when it comes to the bonus feature but otherwise this is a good looking game with an entertaining soundtrack. It clips along nicely with some regular wins.